Alexandria Ocasio-Cortez, Ayanna Pressley, Rashida Tlaib and Ilhan Omar are exactly the type of women we need in politics right now. Of late, they’ve dominated headlines for untoward reasons. Just days ago, US president Donald Trump – without outrightly naming the four women – told them to “go back and help fix the totally broken and crime-infested places from which they came” on Twitter. The politicians retorted by holding a joint press conference together in the Capitol to publicly address the racist remark. Unfortunately, it shows no sign of abating any time soon, as Trump asked a crowd to chant with him “send her back”, referring to Somalia-born Omar during a rally in North Carolina on July 17.

Out of all four women, only Omar was not born in the States. Tlaib was born to Palestinian immigrants, Pressley is African-American and Ocasio-Cortez comes from a New York-Puerto Rican family. Additionally, a bid to launch impeachment proceedings against Trump has been blocked by the US House of Representatives. Ocasio-Cortez has told people to not “take the bait” as Trump attempts to create a “disruptive distraction from the issues of care, concern and consequence”. As the women continue to hold their own, Vogue looks at who “The Squad” is and what its members stand for in 2019. 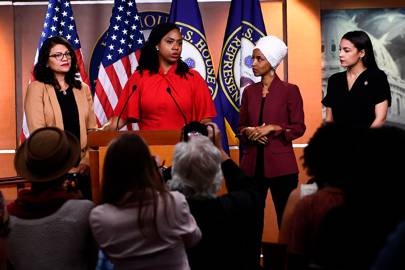 Why are they called “The Squad”?

First of all, it happened organically. The Democratic congresswomen all represent firsts in their right (more on that below). While joking during a photocall about “#SquadGoals”, in reference to the hashtag so often seen on social media platforms, the women were shortly given their moniker of “The Squad”.

A federal appeals court has declined once again Planned Parenthood’s request for an immediately halt to new Trump administration rules ……Read On.

White Americans “can’t be defensive” when talking about race, according to Mayor Pete Buttigieg. “I think the challenge for white ……Read On.