British doctors and nurses are sacrificing a relaxing Christmas with friends and family to help save lives in a deadly measles outbreak on the other side of the world.

The Pacific island of Samoa has been overwhelmed by more than 5,500 cases of the disease.

Seventy-nine people have died, nearly all of them are children under five.

The British medics are working alongside local teams and volunteers from around the world.

“It’s quite something when you see a ward full of people with measles, they look so sick, it’s not something we’re used to,” Dr Rachel Anderson, an A&E consultant in Edinburgh, told the BBC.

“To my knowledge, I’d never seen measles… you feel like you’ve got a bit of catching up to do.”

Rachel was on call with the UK Emergency Medical Team.

The organisation deploys NHS staff to emergencies around the world.

It sent doctors and nurses to tackle diphtheria spreading through Rohingya refugee camps in Bangladesh last year and to help with the massive Ebola outbreak in West Africa in 2014-15.

Vaccinations were made compulsory, schools were closed and restrictions on public gatherings put in place in an attempt to control the virus.

People have been hanging red flags outside their homes to highlight the fact they have not been vaccinated.

Rachel was asked if she could drop everything for the more than 30-hour trip to Samoa.

“It was a bit tricky because it was over Christmas, I had a couple of days debating it, but felt I should go given the devastating effect measles is having here,” she said.

It means missing Christmas with her husband, stepson and the rest of the family. She was supposed to be cooking dinner for 15. The Manchester City fan also had to give up tickets to two football matches over the festive period.

She said: “I’ve had the odd moment when jet-lagged and overwhelmed seeing all these children, but most of me is glad I’m here.

“My husband and are family very supportive, they’d have been surprised if I had not gone.”

Rachel is one of 13 members of the UK Emergency Medical Team currently in Samoa.

James Daley, an A&E nurse with Brighton and Sussex University Hospital NHS Trust, also got the call and decided to go.

“The tree was up, there were presents to buy and then the call comes in and it throws everything up in the air.

“It’s excitement initially, then a little bit of trepidation sinks in that it’s for three weeks and you’re gone over Christmas.”

He was planning a nice family break in Glasgow with his girlfriend.

“It was the first year in the last few that I had Christmas off… my girlfriend had two days of silence, but she was all right with it in the end.”

James has been looking after a lot of very young babies, some less than a year old.

“The thing that strikes me is they’re really suffering, really miserable, really upset,” he told the BBC.

One of the consequences of measles is severe mouth ulcers and painful throats that make it hard to keep them fed and hydrated.

“We’re trying to alleviate that a bit, making sure the babies are relatively pain-free so they can continue breastfeeding or, if that’s not possible, formula.”

Cases are a combination of people coming in with the initial symptoms of measles, as well has those now developing the severe and deadly complications of the disease.

Rachel added: “What we are seeing is very sick children and adults, they have really significant pneumonia and encephalitis (brain inflammation which causes fits and can be fatal).

“If there are deaths, and some days you have a few deaths, that is very sad for everyone.

“But there are some small miracle stories.”

She remembers one little girl with “terrible lung disease” who was sent home to die with a drain in her chest.

“She came back in this week, children can be incredibly resilient.” 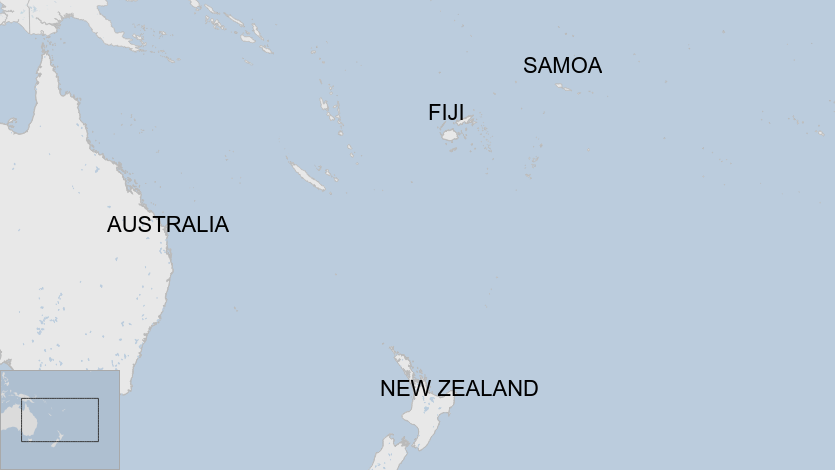 Measles spread like wildfire through Samoa after vaccination rates plummeted.

At least 95% of people have to be immunised in order to stop massive outbreaks of measles.

But the figure in Samoa dropped to a paltry 31%.

One factor was the death of two infants who had been given the measles, mumps and rubella jab that lead to fears over the vaccine itself.

But the deaths were later established to have been because of nurses mixing the vaccine with an expired muscle relaxant, instead of water.

The population of Samoa is about 200,000. There have been 5,520 confirmed measles cases – that’s more than one in every 50 people being infected.

Latest update: 5,520 measles cases have been reported since the outbreak with 26 recorded in the last 24 hrs.

To date, 79 measles related deaths have been recorded, with no fatalities in the last 24 hrs.

VACCINATION UPDATE:As of 21 Dec, 94% of population have been vaccinated.

The outbreak has mostly hit young children as they were the least likely to be vaccinated.

Mass vaccination campaigns mean 94% of the country have now been immunised, but it usually takes between 10 days and two weeks for a vaccine to start working.

“The paediatric ward… at the moment it’s a just a paediatric measles ward,” said Dr Smiti Bihari, a senior paediatric registrar at the Morriston Hospital, Swansea.

She was mostly due to be off over Christmas and was looking forward to spending time with family, “That’s what I’m missing out on,” she said.

When she arrived in Samoa she was working out of a tent in a car park – the hospital was simply overwhelmed with cases.

She added: “It is sad that children have had to suffer when these are preventable diseases, in my career I shouldn’t be seeing measles at all.

“The sheer volume of children suffering, it is sad this hasn’t been prevented, but it is the same in Europe.”

The UK – along with Albania, the Czech Republic and Greece – all lost their measles elimination status in 2018 and Ukraine is dealing with a huge outbreak.

Measles cases have been increasing around the world over the last couple of years and the World Health Organization has described every death as an outrage.

But Smiti says “it’s not all dire” in Samoa.

“It’s a shame this has happened at all, but there’s lots of children going home, lots of smiling babies, happy mums, they’ve just been through quite an ordeal.”

International Development Secretary Alok Sharma said: “While the majority of us are able to enjoy Christmas with our families, this dedicated team of British medics are carrying out lifesaving work in the South Pacific.

“Their generosity and skills will ensure that infected children get the treatment they need over the Christmas period to prevent more families losing loved ones to this deadly disease.”

Christmas is just around the corner when the nights draw in, the festive films are on and the Christmas adverts ……Read On.

The US covid vaccine mandate has the Biden administration gearing up for a fight, as the federal government had all ……Read On.

Coronavirus Has Now Reached Almost Every Part of The World, WHO Says

The number of deaths due to coronavirus will pass 50,000 within the “next few days”, according to the World Health ……Read On.