Uber drivers in seven US cities are planning protests to highlight what they claim are poor working conditions and low wages at the ride-hailing firm.

The drivers say they are paid below minimum wage levels required by some states and barely above national rates.

For 12 hours, the drivers involved in the protests plan to turn off the Uber app and stop working for the ride-hailing firm.

The protests will take place on 8 May when Uber makes its stock market debut.

“Uber’s much-anticipated IPO [initial public offering] will put millions into the pockets of executives, but the drivers who are the core of the service of the company will get nothing,” Shona Clarkson from Gig Workers Rising, which is helping to organise the protests, told The Guardian.

Gig Workers Rising is believed to have 4,000 drivers among its members.

The drivers involved in the protests have four demands:

Drivers would continue to be exploited if they did not get more protections, said Ms Clarkson.

A letter has been delivered to Uber’s headquarters detailing the drivers’ demands and warning it of the shutdown.

In the letter, drivers expressed fears that pay rates would be cut after the IPO as the company sought to make itself more “palatable” to investors.

Publicly available figures suggest that Uber and Lyft drivers are paid $8.55 (£6.87) an hour in the US. This is higher than the national mandated minimum wage level of $7.25, but less than rates set by some states. In California the minimum wage rates for drivers is $11. 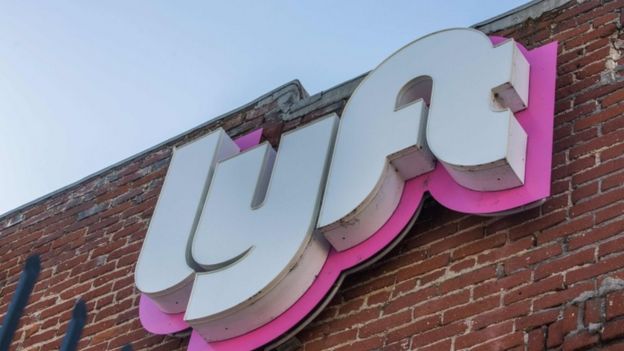 Lyft debuted on the US stock market in April. GETTY IMAGES

New York now operates a city by-law that demands drivers working for Uber, and other ride-hailing firms like Lyft and Juno, must get paid at least $17.22 an hour.

Drivers in San Francisco, Chicago, Los Angeles, San Diego, Minneapolis, Philadelphia and Washington DC will turn off the app on 8 May. A separate protest will be held outside Uber’s head office in San Francisco on the same day.

Uber has not yet reacted to the drivers demands nor responded to a BBC request for comment.

The company has recently run a driver bonus scheme that rewards regular drivers with cash. The scheme is believed to be a way for it to get around US regulations that stop it rewarding drivers, who are not its direct employees, with shares.

However, as Uber driver Jay Cradeur pointed out in a blog, anyone who invested the cash that rival Lyft handed out to its drivers in a similar scheme could have ended up losing some of their bonus if they bought the firm’s shares, because their value had dropped sharply.

Daniel Lewis Lee, a convicted killer has been executed, hours after the Supreme Court allowed the first executions of federal ……Read On.

The number of confirmed COVID-19 cases in the United States surpassed 10,000 on Thursday, doubling over two days as states ……Read On.

A senior Iranian commander has said Tehran will take “harsher revenge soon” after missile attacks on US targets in Iraq. ……Read On.