US objections to wording on climate change prevented Arctic nations signing a joint statement at a summit in Finland, delegates said.

It is the first time such a statement has been cancelled since the Arctic Council was set up in 1996.

A Finnish delegate, Timo Koivurova, said “the others felt they could not water down climate change sentences”.

There is international concern that Arctic temperatures are rising twice as fast as in the rest of the world.

On Monday, US Secretary of State Mike Pompeo addressed the forum in Rovaniemi, northern Finland, with a speech welcoming the melting of Arctic sea ice, rather than expressing alarm about it.

“Steady reductions in sea ice are opening new passageways and new opportunities for trade,” he said. “This could potentially slash the time it takes to travel between Asia and the West by as much as 20 days.”

At short notice he cancelled talks with German Chancellor Angela Merkel in Berlin on Tuesday, in a surprise move. 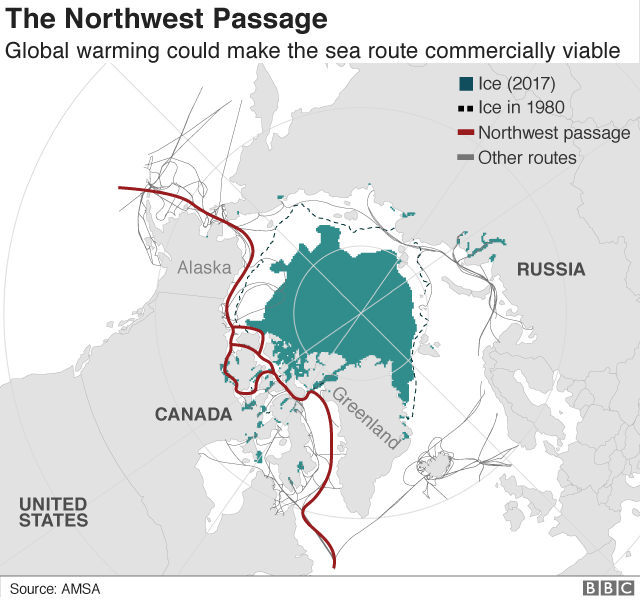 Scientists and environmental groups warn that the retreat of Arctic sea ice threatens polar bears and marine species, but also contributes to rising sea levels, adding to the risk of coastal flooding.

They also warn of a major pollution risk if energy and transport firms find it easier to exploit the pristine Arctic wilderness.

The Arctic Council consists of the United States, Canada, Russia, Finland, Norway, Denmark, Sweden and Iceland. It meets every two years to address economic and environmental challenges in the Arctic.

Sources at the forum told Reuters news agency that the US shunned the joint statement because of wording stating that climate change posed a serious threat to the Arctic.

In 2017 US President Donald Trump pulled out of the 2015 Paris climate accord signed by almost 200 governments. The accord aims to limit a rise in average global temperatures to “well below” 2C (3.6F) above pre-industrial levels by the end of the century.

At the Rovaniemi meeting Mr Pompeo also attacked what he called “aggressive behaviour” by China and Russia in the Arctic region.

EU Foster Children Should be Given Automatic British Citizenship, a Charity Says

Thousands of EU children living in foster care in the UK should be given automatic British citizenship to avoid becoming ……Read On.

Neotropical Cloud Forests to Lose What Most Defines Them: Clouds

In as few as 25 years, climate change could shrink and dry 60-80% of Western Hemisphere cloud forests, finds a ……Read On.

US Farmers Hope Trump Delivers on Trade Deal with Japan

American farmers have not only endured retaliatory tariffs from China and other nations, they’ve watched as most of their top ……Read On.