Britain’s pubs have seemed to be in state of terminal decline over the last decade, with about 700 drinking holes shutting every year.

However, official figures suggest the sector may now be turning a corner.

According to the Office National Statistics, there was a net gain of 320 pubs this year – the first increase since 2009.

Marketing agency Stampede, which obtained the figures, said pubs were starting to broaden their appeal.

Since 2010, almost 6,000 pubs have been lost from Britain as consumers rein in their spending and young people drink less.

Pubs have also been struggling with a “triple whammy” of high beer duty, rising business rates and VAT, according to industry body the Campaign for Real Ale.

The ONS figures, which are the most recent available, show the UK ended March 2019 with 39,135 pubs – a slight net increase on the same month a year earlier.

Most of the new openings were in England, while Scotland and Wales continued to see declines. 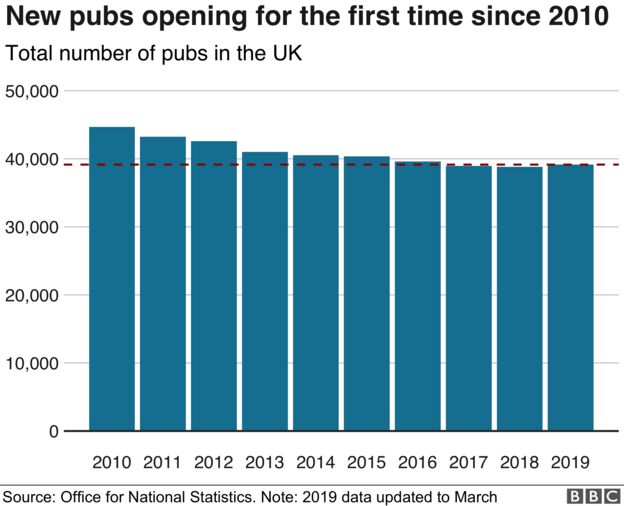 On Tuesday, British pub chain Wetherspoon said it planned to add 10,000 jobs in the UK and Republic of Ireland over the next four years by opening new pubs and hotels and enlarging existing ones.

A spokesman for the chain told the BBC the new figures were welcome news: “Pubs play an important role in their respective communities. We hope that this is a trend that will continue.”

Stampede, which predicts the pub sector will add about 8,975 UK jobs next year, credited the growth to a change in pubs’ attitudes.

It said many operators realised they could no longer rely on the “same old regulars”, and were instead improving their menus, hosting events and offering accommodation.

“The pub trade has had very little to celebrate in the last decade, but I’m sure they’ll raise a glass to these new numbers,” said boss Patrick Clover.

The British Beer & Pub Association said it was “cautiously optimistic” about the figures which differ from its own estimations of pub numbers. The trade group believes closures still outnumber openings but said the decline had been slowing down.

“We would cautiously welcome any good news for pubs, however our own data suggests a higher base of pubs, and has shown higher closure rates for the last five years,” a spokesperson said.

The new Sky Sky Glass is a normal television, with a 4K display, built-in six speakers of Dolby Atmos with ……Read On.

We can do a Brexit Deal if EU is Willing – Johnson

Boris Johnson has claimed his Brexit proposals have picked up support in Parliament, as he urged the EU to compromise. ……Read On.

Some 65,000 fire-prone tumble dryers have been found during a recall campaign by Whirlpool, but hundreds of thousands still remain ……Read On.