The US has more than doubled tariffs on $200bn (£153.7bn) worth of Chinese products, in a sharp escalation of the countries’ damaging trade war.

Tariffs on affected Chinese goods have risen to 25% from 10%, and Beijing has vowed to retaliate.

China said it “deeply regrets” the move and will have to take “necessary counter-measures.”

The move comes as high-level officials from both sides are attempting to salvage a trade deal in Washington.

Only recently, the US and China appeared to be close to ending months of hostilities.

China’s Commerce Ministry confirmed the latest US tariff hike on its website.

“It is hoped that the US and the Chinese sides will work together … to resolve existing problems through cooperation and consultation,” it said in a statement.

Chinese stock markets were little changed after the deadline passed, with the Hang Seng index trading up 0.6% and the Shanghai Composite 1.5% higher.

The market took a beating earlier this week after US President Donald Trump flagged the tariff hike on Sunday.

The 10% duties on $200bn worth of Chinese products – including fish, handbags, clothing and footwear – were due to rise at the start of the year.

That was delayed as negotiations advanced, but Mr Trump is now saying talks are progressing “too slowly”.

The US-China trade war has weighed on the global economy over the past year and created uncertainty for businesses and consumers.

The situation could become worse still, as Mr Trump has also warned he could “shortly” introduce 25% duties on $325bn of Chinese goods.

Mr. Trump said earlier on Thursday he had received a “beautiful letter” from Chinese counterpart Xi Jinping and that they would probably speak by phone.

A White House spokesman said US officials had agreed with the vice-premier to resume talks on Friday morning, according to media reports.

What will be the impact of the tariff hike?

Even though Mr Trump has downplayed the impact of tariffs on the US economy, the rise will deal a blow to some American companies and consumers as firms may pass on some of the cost, analysts said.

Deborah Elms, executive director at the Asian Trade Centre, said: “It’s going to be a big shock to the economy.

“Those are all US companies who are suddenly facing a 25% increase in cost, and then you have to remember that the Chinese are going to retaliate.” 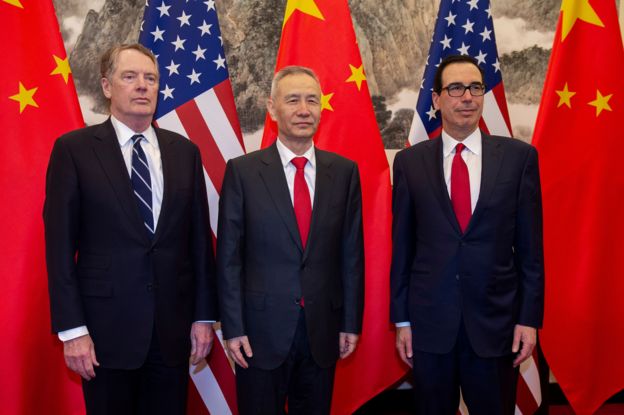 US and Chinese officials have held several round of talks in an attempt to strike a deal to end the trade war. GETTY IMAGES

The American Chamber of Commerce in China said: “While we are disappointed that the stakes have been raised, we nevertheless support the ongoing effort by both sides to reach agreement on a strong, enforceable deal that resolves the fundamental, structural issues our members have long faced in China.”

“There is no greater threat to world growth,” Mr Le Maire told CNews.

BBC economics correspondent Andrew Walker said the direct impact of the trade dispute would be on the US and China.

He said there was economic research suggesting that US tariffs hit American consumers, not Chinese exporters, as President Trump argues.

There could also be wider implications, he added.

“Any softening of demand among Chinese and American consumers and businesses is likely to affect their suppliers.

“To take some possible examples, China is a key market for metals and energy exporters and for suppliers of industrial machinery such as Germany. The US is a key buyer of consumer goods,” our correspondent said.

“These two markets won’t dry up, but they could be a little weaker as a result of any economic hit from the tariffs.”

How will the tariff hike impact negotiations?

White House International Economics Advisor Clete Willems, who until recently was involved in the US-China trade talks, has said the tariff hike wouldn’t be “the end of the game”.

Mr. Willems said there had been difficult periods in trade negotiations previously and that “we’ve always managed to get things back on track”.

“Even if the tariffs do go in place, there is a lot to gain from a deal and hopefully the sides will continue engaging” he said.

The US and China have been negotiating since agreeing on a truce in December.

Even though there had been growing optimism about progress in trade talks recently, sticking points have persisted throughout.

These have included issues around intellectual property protection, how fast to roll back tariffs and how to enforce a deal.

Some had expected trade talks to unravel after the latest escalation.

But analysts say the Chinese are still willing to negotiate to retain the moral high ground and because they recognize the importance of solving the trade war.

“A trade war will be bad for China, both the real economy and the financial markets. It will also be bad for the world economy,” said Gary Hufbauer of the Peterson Institute for International Economics.

“Better for China to play the role of conciliatory statesman than angry retaliator.”

Why are the US and China at odds?

China has been a frequent target of Donald Trump’s anger, with the US president criticising trade imbalances between the two countries and Chinese intellectual property rules he says hobble US companies.

Some in China see the trade war as part of the US’s attempt to curb its rise, with Western governments increasingly nervous about China’s growing influence in the world.

What exactly sparked the US president’s latest actions, which apparently took China by surprise, is unclear.

Ahead of the discussions, Mr. Trump told a rally China had “broke the deal” and would pay for it.

Last year, the US slapped duties on $250bn worth of Chinese goods and China levelled duties on $110bn of US products.

The International Monetary Fund (IMF) said the row poses a “threat to the global economy”.

“As we have said before, everybody loses in a protracted trade conflict,” the body which aims to ensure global financial stability said in a statement, calling for a “speedy resolution”.

Cocaine, Cannabis and Opium: Which Politicians Have Used Drugs and What Did They Take?

The confession by Environment Secretary Michael Gove that he once took cocaine has again shone the spotlight on past drug ……Read On.

The US Will Maintain Oil Production Despite Falling Prices, Says Energy Secretary

The U.S. will maintain its oil production — or even ramp it up higher — despite low energy prices and ……Read On.

Studies Link Earthquakes to Fracking in The Central and Eastern US

Small earthquakes in Ohio, Pennsylvania, West Virginia, Oklahoma and Texas can be linked to hydraulic fracturing wells in those regions, ……Read On.