In the nearly two decades since a co-founder of Dragon Con was accused of molesting teenage boys, a strange legal odyssey has unfolded, including a proposed move to Israel, a trial delay because of a presidential election and an extradition by air ambulance.

Now, Ed Kramer faces new charges that could send him to prison for the rest of his life.

Arrested in August 2000, Kramer was sentenced over a decade later on three counts of child molestation but maintained his innocence.

He was arrested again in February, accused of photographing a child without parental consent and violating his probation. But there was another strange twist. Kramer was working at the time for a private investigator hired by a Gwinnett County judge who reportedly believed District Attorney Danny Porter had hacked her computer. 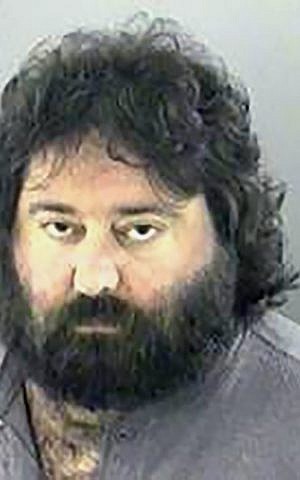 Kramer, 58, believes his arrest was connected to that work, his lawyer said.

Begun in 1987, Dragon Con — a sci-fi, fantasy and gaming convention that opens Thursday — attracts tens of thousands of visitors to Atlanta every Labor Day weekend. Kramer, a co-founder, hasn’t been involved since his August 2000 arrest on charges of molesting two brothers, aged 13 and 15.

Prosecutors said Kramer met the teens while dating their mother, lured them with action figures and sci-fi memorabilia and initiated sexual contact during sleepovers at his house. More charges were added three years later, when another teen came forward.

Porter said Kramer met that third teen through Dragon Con and always had a group of teens, known as “Ed’s boys,” around him at the convention.

Legal wrangling and Kramer’s health delayed his trial numerous times. His court file is jammed with reports from doctors attesting to ailments and assertions that he’s physically unable to stand trial.

There were also unusual delay requests:

Kramer’s attorneys asked the court in 2006 to let him travel to Israel to explore emigrating there as part of a plea agreement. The court agreed. Kramer made the trip, but Israel wouldn’t take someone convicted of child molestation, Porter said.

His trial was scheduled for July 2008 but was delayed because one of his lawyers, former Georgia Congressman Bob Barr, was the Libertarian presidential candidate that November.

The case stalled again in 2009 when Kramer’s lawyers argued his health would prevent him from effectively participating at trial. 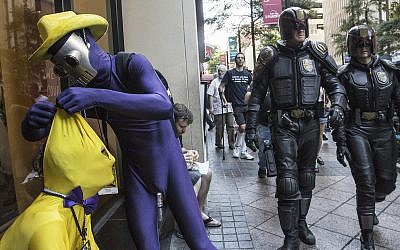 Impromptu costume repairs are made on the street during the opening day of Dragon Con, on Friday, Aug. 29, 2014, in Atlanta, Ga. The sci-fi and fantasy convention draws tens of thousands of attendees each year. (AP Photo/Ron Harris)

Porter learned in September 2011 that Kramer was staying in a Connecticut motel room with a 14-year-old boy, which the prosecutor said violated his bond conditions. Kramer said he was a guardian for the teen, who was in a film being shot there.

Porter said Kramer was seen hiking and not using his breathing apparatus, suggesting Kramer wasn’t too infirm for trial.

On December 2, 2013, with his trial finally about to start, Kramer entered a plea that carried the consequences of a guilty verdict but allowed him to maintain his innocence.

Kramer was sentenced under Georgia’s First Offender Act to five years’ house arrest followed by 15 years’ probation, with credit for time served. He was ordered to pay $100,000 restitution to each of his three accusers and register as a sex offender.

Kramer attorney Stephen Reba sought in October 2014 to scrap the plea, saying Kramer was forced into it because he couldn’t stand trial. That petition was rejected in January and an appeal is pending.

Last February, Kramer was arrested again and accused of photographing a minor without parental consent, which is illegal for sex offenders. A warrant says people saw him photographing a child while at a Feb. 21 medical appointment. But Kramer voluntarily provided his phone passcode and investigators found no photos, Reba said.

While jailed, Kramer filed a grievance in March saying he was assaulted by a jail officer. Authorities charged him with making a false statement, a felony.

“All these things are totally bogus, and yet we’re in this incredibly tenuous position,” Reba said, noting that if a judge determines Kramer violated the terms of his sentence and revokes his first-offender status, he could get the maximum sentence for the 2000 molestation charges.

In February, he wrote, a Gwinnett County judge contacted an investigator because she suspected Porter hacked her office computer. A forensic specialist installed software on the judge’s computer to collect data and had his analyst monitor and analyze it.

That analyst was Ed Kramer.

Kramer determined someone had accessed the judge’s computer without permission when her office was closed, Reba wrote. Kramer was preparing documentation for the judge to take to federal authorities when he was arrested. Investigators also searched his house and seized electronics.

Porter, who said he thinks it’s illegal for a judge to allow an outsider to access her county computer, called the Georgia Bureau of Investigation and recused himself. Porter said he knew nothing of the judge’s suspicions about him before Kramer was arrested and he wasn’t involved in Kramer’s arrest.

Reba called the arrest an abuse of power and said Kramer believes Porter has a personal vendetta against him. Porter said he feels no personal animosity but called the case professionally frustrating.

More than is typical, Porter said, he’s had to anticipate and prepare for challenges. When Kramer was being extradited from Connecticut, Porter worried he might cause a disturbance mid-flight, forcing the pilot to land in another state. Then Porter would have to start extradition proceedings from scratch.

Porter’s solution? A friend who ran an air ambulance business was heading to New York and said he’d pick Kramer up for the price of fuel.

If the new allegations are proven, Porter said he hopes a judge will revoke Kramer’s first-offender status and re-sentence him to a “significant period of incarceration.”

Porter has been anticipating such a development for years: “We set up the probation in such a way that I didn’t think he would make it, and I thought we would get him on a probation revocation.”