OAKLAND, Calif. — For the past year, James Harden, Chris Paul and the Houston Rockets organization have sat around lamenting “what if.”

What if Paul didn’t pull his hamstring in last year’s Western Conference finals against the Golden State Warriors? What if the Rockets had continued to control the series? What if they had played the outmanned Cleveland Cavaliers in the NBA Finals?

These are a lifetime of what ifs, old men in the bar what ifs, alone with your thoughts in the dark what ifs.

This is why this moment now is vital for the Rockets. This is a chance to grasp this karmic turn. Kevin Durant‘s calf injury Wednesday night in the third quarter of the Warriors’ 104-99 win in Game 5 of this year’s conference semifinals knocked the series from its orbit.

It changed Houston’s opportunity. In a flash, the Rockets’ underdog status was nullified. No Durant. No DeMarcus Cousins. Stephen Curry in some bizarre funk that has afflicted his entire game for a week. Houston had already vaporized Golden State’s 20-point lead.

The Warriors understood it. They huddled and stared at one another as Durant hobbled down the tunnel.

“We all looked at each other,” Curry said. “There were a couple smiles in terms of what that meant for us as a team — the guys that were going to need to step up in those moments.”

The Rockets knew it too. It was a three-point game with 14 minutes left. Durant was gone. They all suspected it was serious, possibly an Achilles tendon injury.

Iman Shumpert, who had been nearest to Durant when he shot moments before the injury, swore Durant hadn’t landed on him. He asked his Rockets teammates if they had seen it, thinking maybe in the moment he hadn’t felt Durant.

“Even in times of war, you don’t want to hurt another guy,” Shumpert said.

Durant hadn’t landed on Shumpert, they told him. It was noncontact and he’d looked back as if someone had kicked him, the classic reaction to an Achilles or calf injury. The Rockets knew Durant wasn’t coming back.

They knew that if they could win those 14 minutes, they’d have the leverage. This was a chance to change the direction of history. It was a chance to make Game 5 the last Warriors game at Oracle Arena. 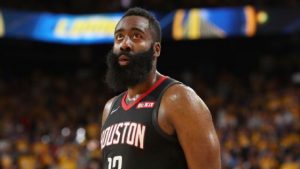 James Harden subbed back into the game with 7:08 left in the 4th quarter with the Rockets trailing by one point. In the final seven minutes, he attempted one shot. Joe Murphy/NBAE via Getty Images

Paul scored only three points in that stretch, missing all three of his shots. Harden, perhaps due to some fatigue, came out with nine minutes left in a change from normal practice. When he returned after a breather, the Rockets were down by one point with seven minutes to play. Harden took a single shot in those final minutes.

With this precious chance in their palms, the Rockets just couldn’t execute.

The memories will instead be of Curry finally breaking out, scoring 12 points in the fourth quarter, the Rockets not being agile enough to smother him though the Warriors were forced to deploy a lineup with limited shooting options.

Memories of the Warriors dodging the bullet and bounding into the locker room with a 3-2 series lead and learning that the manual testing showed Durant had avoided an Achilles injury. Memories of coach Steve Kerr, channeling Liverpool FC manager Jurgen Klopp’s inspirational speech from the day before, labeling his team “f—ing giants.”

The Warriors won a game without Durant to lean on when they’d scored just 47 points in the second half. And the Rockets added another layer to their Warriors nightmare.

The Rockets can’t go out this way. If they do, they might never be able to get over it. Paul has worked his entire career to get this type of chance. He has dealt with blow after blow in the postseason.

One year, when he was in New Orleans, pick-and-roll partner Tyson Chandler was injured. Twice when Paul was with the LA Clippers, he lost star teammate Blake Griffin in the playoffs, once to an ankle injury and once to a foot injury.

In 2015, Paul hurt his hamstring and missed two games in a second-round series the Clippers lost. In 2016, he broke his hand with his team up 2-1 against the Portland Trail Blazers and his team lost the next three games without him.

Then, of course, last year he went down in the final seconds of Game 5 as the Rockets grabbed a 3-2 series lead. The rest you remember: The Warriors won Games 6 and 7 en route to another title.

Harden has been struggling to get back to the NBA Finals since 2012. His tenure in Houston has been defined by glorious regular seasons and then letdowns in the playoffs. After tremendous Games 3 and 4 this week in Houston, Game 5 was right there for Harden to take.

But Durant will not likely be back for Game 6 or a potential Game 7. Paul, Harden and the rest of the Rockets missed the opening presented to them in Game 5. But like the Warriors last season, who rallied after seeing Paul go down, the length of a playoff series affords them a last chance.

Missing on this one, in the wake of last season, would be pure misery. The Rockets now have something they really didn’t expect: the advantage. They always said they believed they could win straight up, but their reliance on whistles at the series’ outset told the true tale: To beat the Warriors, they needed some sort of assistance.

A false step by Durant has presented them within reach of that brass ring. Paul is 34. Harden has chomped the apple many times without reaching his goal. This right here might be it, a last best chance.

“We want their best shot, you know what I mean?” Paul said. “Hopefully [Durant is] all right. We’ll see.”

We will see about a lot.

NBA Playoffs 2019: Stephen Curry Abysmal Down the Stretch in Game 3

This is a game Stephen Curry will soon want to forget. The two-time MVP scored 17 points on 7-of-23 shooting ……Read On.

Ime Udoka and Celtics to NBA Playoff Final Since 2012

As the Boston Celtics narrowly defeated the Miami Heat in the Eastern Conference Finals to play next with the Golden State Warriors in the NBA Finals. ……Read On.

The Minnesota Timberwolves got the number one pick this time even though the NBA draft was delayed three months it ……Read On.