Just In
In a small farming community in southern Pakistan, villagers will no longer shake Hazar Khan Seelro’s hand.
Five people in the 70-year-old’s family have been diagnosed with HIV in the past month. Seelro lives in the rural village of Allah Dino Seelro, where people live in mud huts, use cow dung as cooking fuel, and transport their goods on donkey carts, and residents are terrified of catching the disease.
“Villagers have stopped visiting us,” Seelro said. “They won’t even have a meal with us.”
Twenty-one people in Allah Dino Seelro — which has an estimated population of 1,500 — have been diagnosed with HIV in the past month, including 17 children, according to Dr. Ramesh Lal Shetiya, the medical superintendent at the area’s main hospital. Literacy levels here are low and education about the disease is scant, meaning many do not understand how they got the virus.
This village’s problems are the tip of the iceberg in this region.
On Sunday, Pakistan authorities announced that over the past two months, 681 people — including 537 children between 2 and 12 years old — have tested positive for HIV in Ratodero, a district of 330,000 in Pakistan’s southeast Sindh province, which includes the satellite village of Allah Dino Seelro.
As Pakistan — the world’s sixth-most populous country with over 200 million people — faces an HIV outbreak, experts are placing the blame on the nationwide practice of doctors reusing needles. 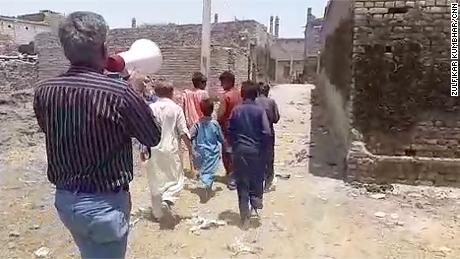 Although Pakistan’s authorities haven’t conclusively determined the cause of the outbreak, Zafar Mirza, the country’s special assistant to the Prime Minister on health, said at a press conference in Islamabad Sunday: “There’s a huge problem in Pakistan where syringes are being repackaged and sold again.”

Fears of an HIV outbreak began in April, when Dr. Imran Arbani, who runs a private clinic in Ratodero, noticed a spike in cases of the disease.
Arbani alerted local media. Since then, more than 14,000 people have been screened in the city, according to a medical report by local health chief, Masood Solangi, which has been seen by CNN.
As more people are diagnosed in the infected areas of Sindh province, about 1,000 kilometers (621 miles) from the capital Islamabad, health systems are coming under strain. “The hospitals are overcrowded,” Mirza said Sunday. “Visiting and seeing this has been a reality check about the issues on the ground.”
At the end of April, Ratodero doctor Muzaffar Ghanghro was arrested in connection to the sudden HIV crisis and charged with attempted murder and causing harm which endangers life or causes the victim severe bodily harm, according to a police report seen by CNN. He is currently being held behind bars in Ratodero as police continue to investigate the charges.
But Athar Abbas Solangi, Ghanghro’s lawyer, insisted his client is not guilty.
“The doctor has been made into a scapegoat for the larger crisis in the
region,” said Solangi, who says that there were no infected drips or syringes found in his client’s clinic. “My opinion is that the work he has done has been done according to law. The case against him cannot be proved.”
HIV is a familiar fear in Pakistan, where an estimated 150,000 adults and children are living with the disease. The outbreak in Sindh is unusual, however, because it mostly affects children. Prior to the crisis, only 1,200 children in all of Pakistan had been receiving treatment for HIV, according to the World Health Organization.
That unusual demographic in Sindh has given investigators potential insight into the cause of the latest outbreak. HIV can be spread primarily through transfusions of unscreened blood, unprotected sex, or injections.
Given the age of some of the children infected, Mirza said unsafe injections were the most likely cause of the outbreak.

The problem of unsafe needles stretches beyond Ratodero — and it’s been going on for years, said Naseem Salahuddin, the head of the infectious disease department at the Indus Hospital in Karachi in southern Pakistan.
“We have been screaming from the rooftops trying to alert the authorities but nothing was done until now,” said Salahuddin, who has worked closely with hospitals across the country.
She said she began raising the alarm in 2017.
Receiving drugs via injection is popular in Pakistan, due to a cultural belief that injected drugs or drips work better than pills, Salahuddin said. Research published in 2005 found injections were overused in the Sindh province of Pakistan.
In smaller clinics, a doctor might have around 200 patients a day, according to Salahuddin. To save time, they often reuse the same syringe on different patients, she said.
“Reuse of needles is a given,” she said, adding that doctors at medical colleges weren’t being trained properly in infection control. “Guidelines are not followed.”
UNAIDS Maria Elena G Filio Borromeo agreed that the practice of unsafe injections and unsafe blood transfusion is “rampant.” Unlicensed blood banks and clinics in the area have been shut down, she said.
This week, a joint World Health Organization and Center for Disease Control team has gone to Ratodero to identify the cause of the outbreak and how to control it.
That is something that Mirza said is very important.
“Unless we get to the cause of this outbreak, it will continue to spread,” he said.

India and Pakistan have a fraught relationship at the best of times, but when it comes to cricket, the competition ……Read On.