It’s the turn of South America to enjoy the spectacle of a total solar eclipse.

Skywatchers in parts of Chile and Argentina will see the Moon pass directly in front of the Sun, blocking out the light for just a few minutes.

It will be late in the day, however, and anyone lucky enough to be in the “path of totality” will be looking at the event close to the horizon.

As always, people are urged to take great care during an eclipse. Gazing into the Sun can damage the eyes.

Proper protection is needed, such as the use of approved solar glasses. 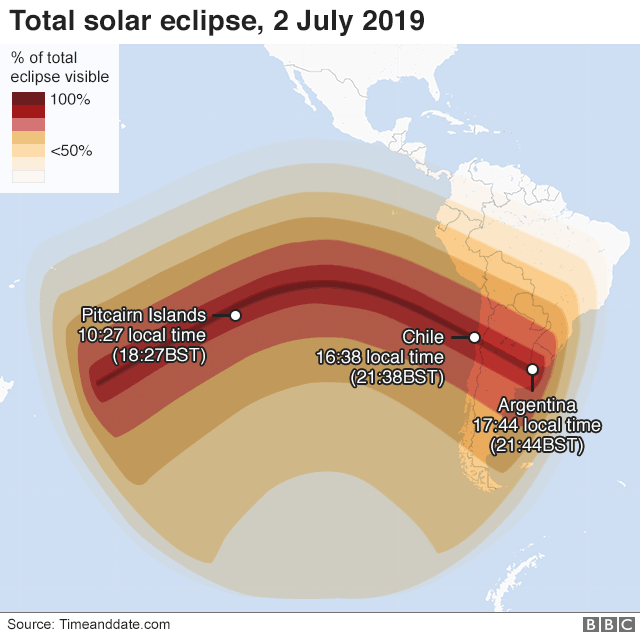 This year’s total solar eclipse begins out over the Pacific.

Ships and planes will be heading out from French Polynesia to witness it.

The first – and only – piece of land in the Pacific to lie in the path of totality is tiny Oeno Island – part of the Pitcairns British Overseas Territory.

This uninhabited atoll will be plunged into darkness for nearly three minutes, starting at 10:24 local time (18:24 GMT).

Passage over the Andes Mountains and through the South American continent is swift. Among those last to experience totality will be the inhabitants of Chascomús in the district of Buenos Aires at 17:44 local time (20:44 GMT), not long before sunset.

Everyone will be looking for the classic features of a full solar eclipse. These include “Baily’s beads”, which arise as the last shafts of sunlight drive through valleys on the Moon; and the “Diamond Ring”, which is the single brilliant point of light that signals the beginning and end of totality.

“But I have to say, no matter how long it lasts – it feels like eight seconds. You’re so completely caught up, you find yourself saying, ‘go back, go back; I wasn’t done! It all goes by in an instant.”

Dr McCarthy will be watching this event in Chile. He’s Vice President of the Giant Magellan Telescope (GMT) facility, which is being built in the Atacama Desert.

The telescope site is fractionally to the north of totality, and so the astronomer, colleagues and friends will be making a short drive to make sure they are in just the right spot.

“Going into a total solar eclipse is a remarkable feeling,” says Dr McCarthy. “The colours get bluer, the shadows change and everything on the ground looks washed out. It’s as if the world is becoming darker, almost monochromatic.”

The GMT is a next-generation telescope that will have a 24.5m-wide primary mirror system.

Its infrastructure is steadily being emplaced atop Cerro Las Campanas, with first observations of the sky due to begin in late 2026, with full operation expected in 2018.

Although the emphasis in a total solar eclipse is on the narrow path of full shadow, there is a much wider area that will get to appreciate a partial event of varying darkness.

This means all of the rest of Chile and Argentina, as well as Peru, Ecuador, Paraguay, Bolivia, Uruguay, and parts of Colombia, Brazil, Venezuela and Panama. It’s really just the northern coast of South America that misses out.

The next total solar eclipse after Tuesday is also over South America, on 14 December, 2020.

On the 50th anniversary of Apollo 11’s historic launch, it was almost as if the moon was paying its own ……Read On.

Malaria has been eliminated from Algeria and Argentina, the World Health Organization (WHO) said on Wednesday, an important milestone in fighting the ……Read On.