Just In
International charity Save the Children says it is running out of money to help thousands of survivors in cyclone-weary Mozambique and has launched an appeal for more funding.
Tropical Cyclone Kenneth, the strongest storm to hit the region since records began, made landfall Thursday, then moved slowly over the eastern African nation, killing 38 people and dumping torrential rains in areas still reeling from the devastation wrought last month by Tropical Cyclone Idai.
That storm spawned massive floods, killed 750 people and caused an estimated $1 billion in damage in the country.
“Both cyclones have shattered families and destroyed livelihoods. The loss of life is devastating. Those who were already living on the brink of poverty have now been left with nothing. With donations dwindling, we’re facing a critical situation,” Nicholas Finney, Save the Children’s response team leader for both cyclones, said Monday in a statement. 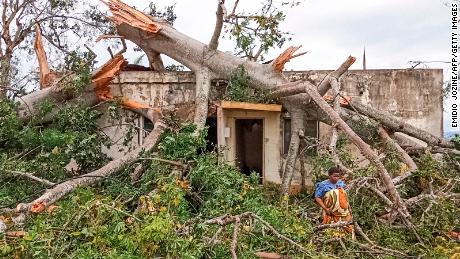 A woman assesses damage in Macomia in northern Mozambique.

Kenneth also injured more than 35,000 people in Mozambique, its disaster management agency reported Monday. The storm killed at least four people in the island nation of Comoros, the United Nations Office for the Coordination of Humanitarian Affairs said.

‘We still have time to save lives’

The UN agency pledged to release $13 million to pay for food, shelter, health, water and sanitation assistance in Mozambique and Comoros.
Save the Children said the damage from the Kenneth is more “catastrophic” than expected and more resources are needed to save lives.
“The humanitarian needs in Mozambique in the wake of Cyclone Kenneth are significant and life-threatening, and we need donors to dig deep now, while we still have time to save lives,” Finney said.
A cyclone survivor told Save the Children’s team in the provincial capital of Pemba, which experienced heavy rainfall and flooding, that she lost a child after her house collapsed, the agency said.
“After the wall fell down, the first thing I did was call the neighbors and they started to remove the wall and they started shoveling the bricks and dirt to find the children,” Tina, 30, said, according to Save the Children.
“When we found the children, we took them to the hospital,” she continued. “Unfortunately, one of my children died. I am very sad because of what happened. My heart is hurting.”
More rain will fall in northern Mozambique over the next four days, worsening flooding in hard-hit areas, forecasters said.

Former Egyptian president Mohamed Morsi died on Monday in a Cairo hospital, after fainting during a session in court, judicial ……Read On.

Do you see yourself a rising star of African journalism? You have a chance now as the BBC seeks a ……Read On.

Coronavirus is Taking ‘Different Path’ in Africa Due to Age Difference

Coronavirus appears to be taking a “different pathway” in Africa compared with the rest of the world, the World Health ……Read On.