President Vladimir Putin has said North Korea is open to denuclearisation, but that it needed security guarantees before moving forward.

Meeting for the first time, Mr Putin and Kim Jong Un attended their historic summit in the far eastern Russian city of Vladivostok.

Speaking afterwards, the pair announced the summit to be a success, with Mr Putin calling Mr Kim a “smart and interesting person”.

When the leaders parted, they waved and smiled broadly at each other.

The Russian president said: “We are satisfied with talks. Kim Jong Un is an open person, who ready to discuss issues. We had a number of different topics and we managed to discuss them all, including denuclearisation. He is a smart and interesting person to talk to.” 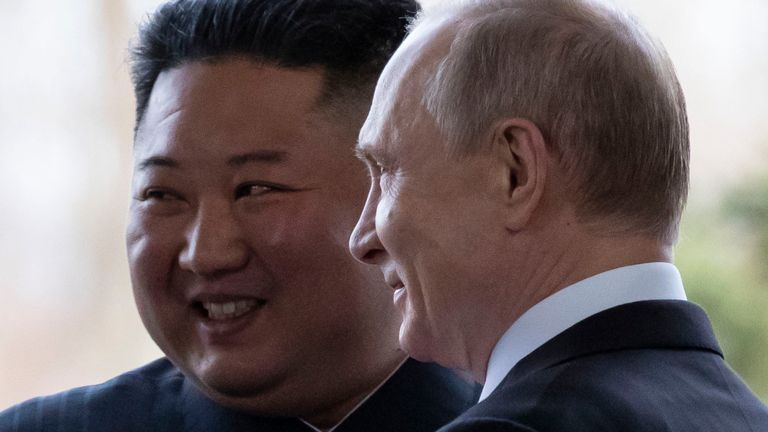 Mr. Putin has emerged from the summit appearing to have positioned himself as a gate-keeper of sorts to the North Korean leader.

He said Mr. Kim had asked Russia to inform America about North Korea’s position, and added that he would hold discussions with both US and Chinese colleges in Beijing.

He continued to say he did not think it was time yet to resume six-way talks on the nuclear stand-off.

Mr. Putin confirmed Russia was in favour of total denuclearisation of the Korean peninsula – in line with his US counterparts.

He said he believed Mr. Kim wanted this too – but needed security guarantees. The Russian leader said he did not think bilateral security agreements would be enough for Mr. Kim.

After their talks, Mr. Putin hosted a dinner in Mr. Kim’s honour.

In a room apparently lined with blue velvet and dotted with tiny star-like lights, Mr. Putin guided Mr. Kim along a table of valuable items – including a golden sword.

The pair then toasted each other.

“I propose a toast to the further strengthening of friendship and cooperation between the Russian Federation and the Democratic People’s Republic of Korea, to the well-being of the peoples of our countries, and to the health of comrade Chairman Kim Jong Un and all those present here today,” Mr Putin said, raising a glass of white wine with Mr Kim.

The North Korean leader, who gave thanks for the warm welcome he and his party received, followed and said: “Today, I have had a frank and substantive exchange of opinions with Mr. Putin pertaining to the development of the Russian-Korean relations of friendship, the provision of peace and security on the Korean peninsula and in the region, and global affairs of interest.”

He added: “I am happy to say that today’s remarkable meeting is a logical result of the relations of friendship between the two countries, which have existed for a long period of time.”

Discussion over trade and movement of workers was also discussed, with Mr. Putin saying he was hopeful that Russia would be able to complete some infrastructure projects with North Korea.

He added that Russia was happy with the North Korean workers who were currently in Russia.

Mr. Putin also said Russia was willing to discuss both a gas and an oil pipeline with North Korea.

Moscow has said it will take “countervailing military measures” should NATO fulfil any threat related to Russia’s nuclear-ready cruise missile ……Read On.

OPEC and Russia are likely to extend their oil production deal at least through midyear, but if they were to ……Read On.

Ukraine’s President Volodymyr Zelensky fired two important members of his cabinet because he didn’t think they were good leaders and ……Read On.