Just In
Prosecutors investigating the causes of the inferno that tore through Notre Dame Cathedral in Paris have interviewed construction workers and security staff, as more details emerged about the effort to contain the blaze.
Ten people were interviewed by criminal investigators on Wednesday, the Paris Prosecutor’s Office said, adding that interviews would continue on Thursday. On Tuesday, the prosecutor’s office had said 30 employees at the Paris landmark had been questioned.
“Tomorrow new witnesses will be heard as well as people already interviewed for further information,” the prosecutor’s office said.
The prosecutor’s office said that in addition to interviews, forensics teams and the central laboratory for the police department had been able to access some areas of the site and begin inspections. Officials are continuing to pursue the theory that the cause of the fire was accidental but have not ruled out other scenarios at this stage, the prosecutor’s office added.
“While the prosecutor’s office does not rule out any hypothesis, we remind that at this stage, nothing in the investigations highlights a criminal origin.
Accidental causes remain our privileged lead,” the prosecutor’s office said.
The Paris fire service, meanwhile, said the nine-hour battle to save the building was one of the most complex it had ever undertaken. At one point, it was feared that the entire structure might be lost.
“If the flames had actually got to the timber frames of the belfries then we would have lost the cathedral completely because it would have led to a chain reaction of collapse,” said Gabriel Plus, a spokesman for the fire service.
Philippe Demay, deputy chief of the Paris Fire Brigade, told reporters on Wednesday that the operation to put out the flames was “complex,” and the “most complicated” he had ever encountered.
On Wednesday evening, cathedrals across France rang their bells in honor of Notre Dame, marking two days since the fire. Bells tolled at 6:50 p.m. across the country acknowledging what the French Bishops Conference described as “a shock that affects far beyond just the Catholics of our country.”
The French government said it was committed to rebuilding the cathedral. Prime Minister Edouard Philippe announced an international architects’ competition to replace the building’s fallen spire.
As the scale of the damage became clear, investigators said they were determined to get to the bottom of how the blaze started. “Investigations continue to search for the truth and identify the origins and causes of the fire,” the Paris Prosecutor’s Office said.
Scrutiny has fallen on the firms undertaking the renovation of the 150-year-old spire, which collapsed Monday as the flames raged around it.
Of the four companies contracted to carry out renovations at Notre Dame, two companies, scaffolding firm Europe Echafaudage and art conservationists Socra, had work in progress there at the time of the fire. Neither company had workers on site when the fire broke out, CNN has been told. 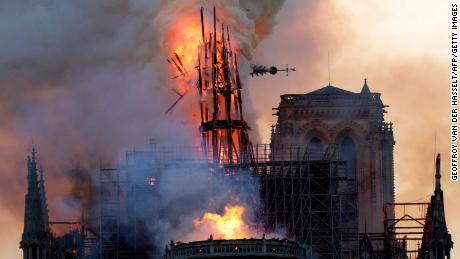 According to centraledesmarches.com, a website where private companies can bid for public projects, Europe Echafaudage and its parent company, Le Bras Freres, were awarded contracts worth €3,493,766 ($3,951,396) for scaffolding and other services.
Julien Le Bras, CEO of Europe Echafaudage, which received a contract to renovate the spire in 2017, told reporters Tuesday that 12 of his employees were working on the project, but that “there were absolutely no workers on site when the fire broke out, and there hadn’t been for quite a while before the fire.”
Mark Eskenazi, a PR representative for Le Bras Freres, said the company is speaking to experts about how to take down the scaffolding and “absolutely” denies responsibility for what happened, saying that its workers had left the cathedral one hour before the fire began. He called the fire a “crisis” for the small business of 20 workers. “They are artisans, it is a very small enterprise.” 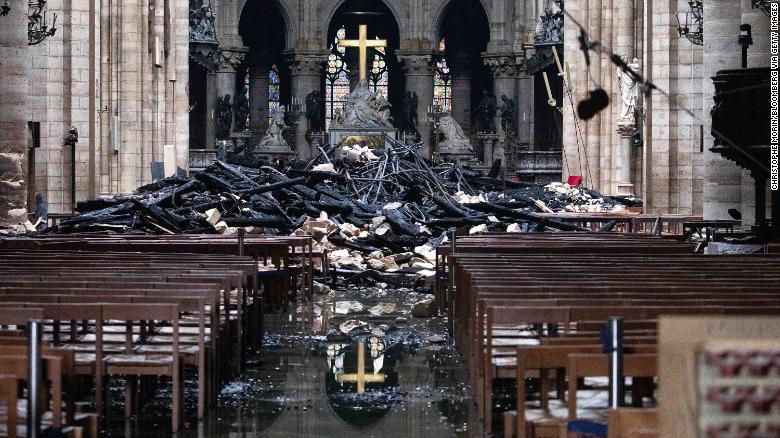 Patrick Palen, a spokesman for Socra, which was brought in to refurbish statuettes from the cathedral, said workers from the company removed 12 statues of the apostles and four of evangelists from the cathedral last week.
Those statues were being held safely in an off-site workshop at the time of the fire. Palen said Socra employees were not at Notre Dame during the fire.
Questions have been raised about why the blaze was not tackled sooner.
Security guards at the 850-year-old cathedral first heard the fire alarm at 6:20 p.m. local time on Monday, and evacuated the cathedral even though they didn’t see any sign of fire, a spokesman for the Paris Fire Brigade said.
The alarm sounded again some 20 minutes later, at which point the cathedral’s security officers noticed the fire, Paris Prosecutor Remy Heitz said.
Fire chiefs denied that they were slow to react to the initial reports of the blaze.
Despite the intensity of the fire, authorities have said that some of the cathedral’s major relics, artifacts and artwork had been rescued. Some of the most valuable artworks are being held at City Hall, while a number of other pieces are being transferred to the Louvre museum.
The Crown of Thorns, believed by many to be a relic of the passion of Christ, and the Tunic of Saint Louis were saved. A copper rooster that sat atop the collapsed spire has been recovered intact.
Le Parisien newspaper, citing a source from the Ministry of Culture, said it was not yet known if relics contained in the rooster had survived the blaze.
Donations toward the restoration have been rising steadily; the total raised so far for the reconstruction of the Gothic masterpiece has topped €800 million ($904 million), including gifts of tens of millions of euros from some of France’s wealthiest families.
French billionaire Bernard Arnault, chairman and CEO of luxury good consortium LVMH, pledged $200 million, adding to a purse of $55 million promised by the city of Paris.
Cosmetics company L’Oréal, along with The Bettencourt Meyers family and the Bettencourt Schueller Foundation, has donated €200 million ($226 million) to help fund the repairs.
The Vatican said it will offer technical know-how on rebuilding the cathedral. “We have the type of know-how that the whole world recognizes as being of high quality,” Cardinal Gianfranco Ravasi told reporters. “So I think an eventual future offer by the Holy See will be significant.”
Prime Minister Edouard Philippe said the contest to replace the spire “will be organized in due course.” A committee will be set up to oversee the project and will decide whether the spire should be reconstructed or “adapted to modernity,” he said.
Philippe did not say if the rebuild of the cathedral would be finished in time for the 2024 Paris Olympics, but said the work would be done as fast as possible.

Migrants clash with Greek police on the buffer zone Turkey-Greece border, at Pazarkule, in Edirne district, on February 29, 2020. ……Read On.

UK ‘First in Line’ for US Trade Deal, Says Bolton

The UK is “first in line” for a trade deal with the US, President Trump’s National Security Adviser has said. ……Read On.

EU Foster Children Should be Given Automatic British Citizenship, a Charity Says

Thousands of EU children living in foster care in the UK should be given automatic British citizenship to avoid becoming ……Read On.