Jaime Lannister is almost certainly going to die on “Game of Thrones.”

But his fans can quell their anxiety for now, because — despite rampant online rumors — it won’t happen in the Battle of Winterfell coming up this Sunday, which is bound to have a high body count. Here’s why.

The second episode of Season 8, “A Knight of the Seven Kingdoms,” seemingly set up Jaime (Nikolaj Coster-Waldau) for an imminent grave.

He had closure with his brother, Tyrion (Peter Dinklage), and apologized to Bran Stark (Isaac Hempstead-Wright) for his original sin of crippling him in the show’s pilot.

Jaime humbled himself, reflected on his past misdeeds and how he’s changed.

He also had closure with Brienne (Gwendoline Christie), which culminated his evolution (and their love) with a moment of grace — knighting her. 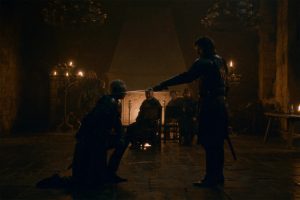 Plus, he got way too much happiness. A suspicious amount. All signs point to him falling in the battle of Winterfell, maybe while saving Brienne or Bran Stark. He’s had an incredible redemption journey, evolving a staggering way from the arrogant bully he was at the show’s beginning. Yes, these kinds of character arcs end with heroic death.

In the books, there’s a prophecy that Cersei will be killed by the “valonqar,” or “little brother.” While Tyrion is the obvious choice, it applies to Jaime too, since he’s the younger twin. It would certainly be the Shakespearean choice. And House Lannister is the most Shakespearean, with its record of kinslaying (when Tyrion killed Tywin). Ergo, Jaime the Kingslayer needs to Queenslay (and sister-slay) in order to complete his arc and fulfill that juicy tragic potential. 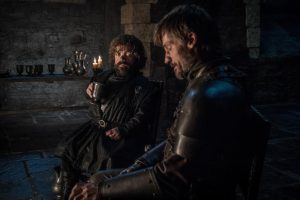 Now, you could make the argument that this won’t happen, since that part of the prophecy is in the books but cut from the show. But if that’s the case, Jaime still needs to stick around until Cersei gets her comeuppance — even if he’s not the one delivering it.

Because while the show cut that aspect of the prophecy, it did include the classic Cersei speech from back in Season 1 about how she and Jaime came into this world together and will leave it together. You can’t not follow through on a line like that. 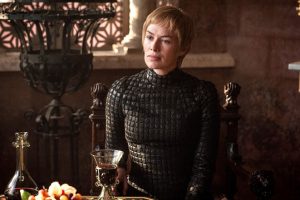 So, assuming Cersei sits out another episode and doesn’t show up to the Battle of Winterfell, meaning she’s still alive at the end of Sunday’s episode — then Jaime will be, too.

The Lannister twins — even estranged as they are now — have to die together.

In the unlikely event that Jaime doesn’t kill her, they might die in different scenes. But the camera could then cut between their simultaneous deaths while music plays, the way it did in the sequence when Cersei blew up the Sept at the end of Season 6.

Any other send-off for them would be less dramatic. And “Game of Thrones” isn’t known for shirking drama.

Luca Guadagnino will pen the script, serve as showrunner and helm the Italy-set ‘We Are Who We Are,’ which also ……Read On.

The last time we saw The Mountain on “Game of Thrones”, he was hurtling to his death in a giant ……Read On.

Yet Another ‘Game of Thrones’ Prequel is Coming

Brace yourselves: another prequel is coming. Deadline reports that HBO is “close to giving a pilot order” to yet another ……Read On.