Free-to-use cash machines have been disappearing at a rapid rate across the UK, according to a study by Which?

Nearly 1,700 machines started charging for withdrawals in the first three months of the year, with the majority starting to charge in March, according to the consumer lobby group.

Cardtronics, which runs most of those, and fellow provider NoteMachine are both likely to charge at more machines.

That could mean the country losing 13% of its free ATMs in only a few months.

The changes come after a reduction in the fee operators receive from banks each time an ATM is used.

Link, which oversees ATMs, began to cut the fee, known as the interchange rate, last year. It is being slowly reduced from 25p to 20p per withdrawal, in annual steps over four years.

Link said at the time that the move was aimed at protecting the ATM network. It left the fee for free-to-use ATMs – which are 1km or more from the next nearest cash machine – unchanged.

The town struggling with a cash machine shortage

Ashleigh Cooper from Hebden Bridge in West Yorkshire has seen the number of cash machines dwindle from six down to two.

Mr Cooper, aged 60, said: “It causes real problems especially on bank holidays. There are no banks here anymore. We have a mobile bank that visits every few weeks but that’s no good to me.

“Hebden Bridge is quite a touristy area and there’s usually a problem with one of the cash machines going out of order because it’s run out of cash.

“The local cinema here was always a cash business but they’re now having to accept digital payments or lose punters.

“For me it’s like going back to the dark ages, it’s crazy.”

ATM operators receive the interchange fee from banks each time one of their cash machines is used.

NoteMachine, which operates 7,000 cash machines across the UK, said the cut in the interchange rate meant it was considering introducing fees at up to 4,000 of its machines.

“Unless urgent action is taken to reduce the pressure on ATM operators by reversing the interchange fee reductions, NoteMachine will be forced to begin converting ATMs to surcharging,” said chief executive Peter McNamara.

Rival ATM machine operator Cardtronics has said it is likely to convert another 1,000 of its ATMs over the coming months. It said it “had been forced into charging a fee for cash withdrawals on some of our machines where Link’s cuts have left us with no choice”.

There were about 52,000 free cash machines in the country at the start of the year.

Gareth Shaw, head of money at Which?, said: “Communities are being stripped of free access to cash at an alarming rate that could hit the most vulnerable in our society the hardest, while denying millions of people free withdrawals.

“A regulator is desperately needed to get a grip of these rapid changes across the cash landscape and ensure all those still reliant on this important payment method aren’t suddenly shut out from accessing the cash they need in their daily lives.”

Reported charges range from 50p to £1.99 and the situation angered some of the respondents to the Which? survey.

Anita Brakewell, from Blackpool, said: “Being disabled means I don’t have the option of walking to the next free cash machine, so these charges shut me out of cash that’s important to my daily life.

“My town has also suffered from bank branch closures, making it hard to access the cash and financial services I need.”

And Robin Farnsworth, from Kirkcaldy, said: “I stopped using the local cashpoint when it started charging me just to access my cash. I’m on a very tight budget and can’t afford to be spending out just to get the money I need for everyday life.” 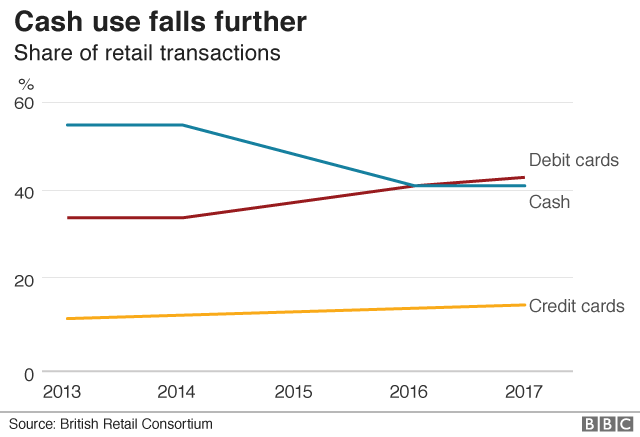 And last year’s Access to Cash study, published in December, found that more than eight million people would struggle to cope in a cashless society, which would present real challenges for 25 million UK residents.

However, cash use has halved in the past 10 years and in 2017, debit cards overtook notes and coins as the UK’s most popular payment method.

There is a fierce, three-way, struggle going on over the future of our network of free-to-use cash machines.

The upstarts are independent operators like Cardtronics and Note Machine which now have the most ATMs.

Then there are the banks. They have to pay the operators each time their customers use a non-bank machine.

Finally, we have Link which runs the network and has been trying to get the operators to accept lower payments from the banks.

Two cuts to the payments have been pushed through, prompting Cardtronics to say it is being “forced” to charge the customer instead.

And the backdrop is that we are using less cash, which means fewer withdrawals and less chance that a cash machine will pay its way.

So it’s not clear where this will end.

But more charging will cause anger and frustration amongst those who depend heavily on cash.

Brexit Bill to Give New Powers to British Judges

The government’s Brexit bill will enable more British judges to depart from previous rulings of the EU’s top court, Downing ……Read On.

Fears UK Could Follow the US into Opioid Crisis

Overuse of powerful prescription medication could lead to an addiction crisis in the UK similar to that being seen in ……Read On.