Parliament has officially been suspended for five weeks, with MPs not due back until 14 October.

Amid unusual scenes in the House of Commons, some MPs protested against the suspension with signs saying “silenced” while shouting: “Shame on you.”

It comes after PM Boris Johnson’s bid to call a snap election in October was defeated for a second time.

Opposition MPs refused to back it, insisting a law blocking a no-deal Brexit must be implemented first.

In all, 293 MPs voted for the prime minister’s motion for an early election, far short of the two thirds needed.

Parliament was suspended – or prorogued – at just before 02:00 BST on Tuesday.

As Speaker John Bercow – who earlier announced his resignation – was due to lead MPs in a procession to the House of Lords to mark the suspension, a group of angry opposition backbenchers appeared to try to block his way.

Late into the night, MPs also burst into song on the Commons benches, singing traditional Welsh and Scottish songs.

During the five-week suspension, parties will hold their annual conferences but no debates, votes or committee scrutiny sessions will take place.

Boris Johnson will not face Prime Minister’s Questions until the period is over and his scheduled questioning by the Commons liaison committee on Wednesday has been cancelled.

Parliament’s suspension means MPs will not get another chance to vote for an early election until they return, meaning a poll would not be possible until November at the earliest.

It is normal for new governments to suspend Parliament, but the length and timing of the prorogation in this case has sparked controversy.

The decision to prorogue was entirely in the hands of the government, although there have been failed attempts via the courts to stop it.

The Welsh members also gave us a beautiful song. With harmony! 🏴󠁧󠁢󠁷󠁬󠁳󠁿 pic.twitter.com/iXV8xeuDoX

Elsewhere on Monday, in a hectic day of political developments:

At present, UK law states that the country will leave the EU on 31 October, regardless of whether a withdrawal deal has been agreed with Brussels or not.

But new legislation, which was granted royal assent on Monday, changes that, and will force the prime minister to seek a delay until 31 January 2020 unless a deal – or a no-deal exit – is approved by MPs by 19 October.

BBC political editor Laura Kuenssberg said although No 10 insisted it was not looking to break the new law, efforts were under way to examine ways of getting around it.

Mr Johnson said the government would use the time Parliament was suspended to press on with negotiating a deal with the EU, while still “preparing to leave without one”.

“No matter how many devices this Parliament invents to tie my hands, I will strive to get an agreement in the national interest,” he said.

“This government will not delay Brexit any further.”

Mr Johnson told MPs Mr Corbyn had previously said he would back an election if legislation to prevent the government from forcing through a no-deal Brexit on 31 October became law.

“By his own logic, he must now back an election.”

But Labour, the SNP, the Liberal Democrats, the Green Party, the Independent Group for Change and Plaid Cymru have all agreed they will not back an election until the no-deal legislation has been implemented.

Mr Corbyn told MPs his party was “eager for an election – but as keen as we are, we are not prepared to risk inflicting the disaster of no deal on our communities, our jobs, our services or indeed our rights”.

And he said the prime minister was suspending Parliament to avoid discussions of his plans. 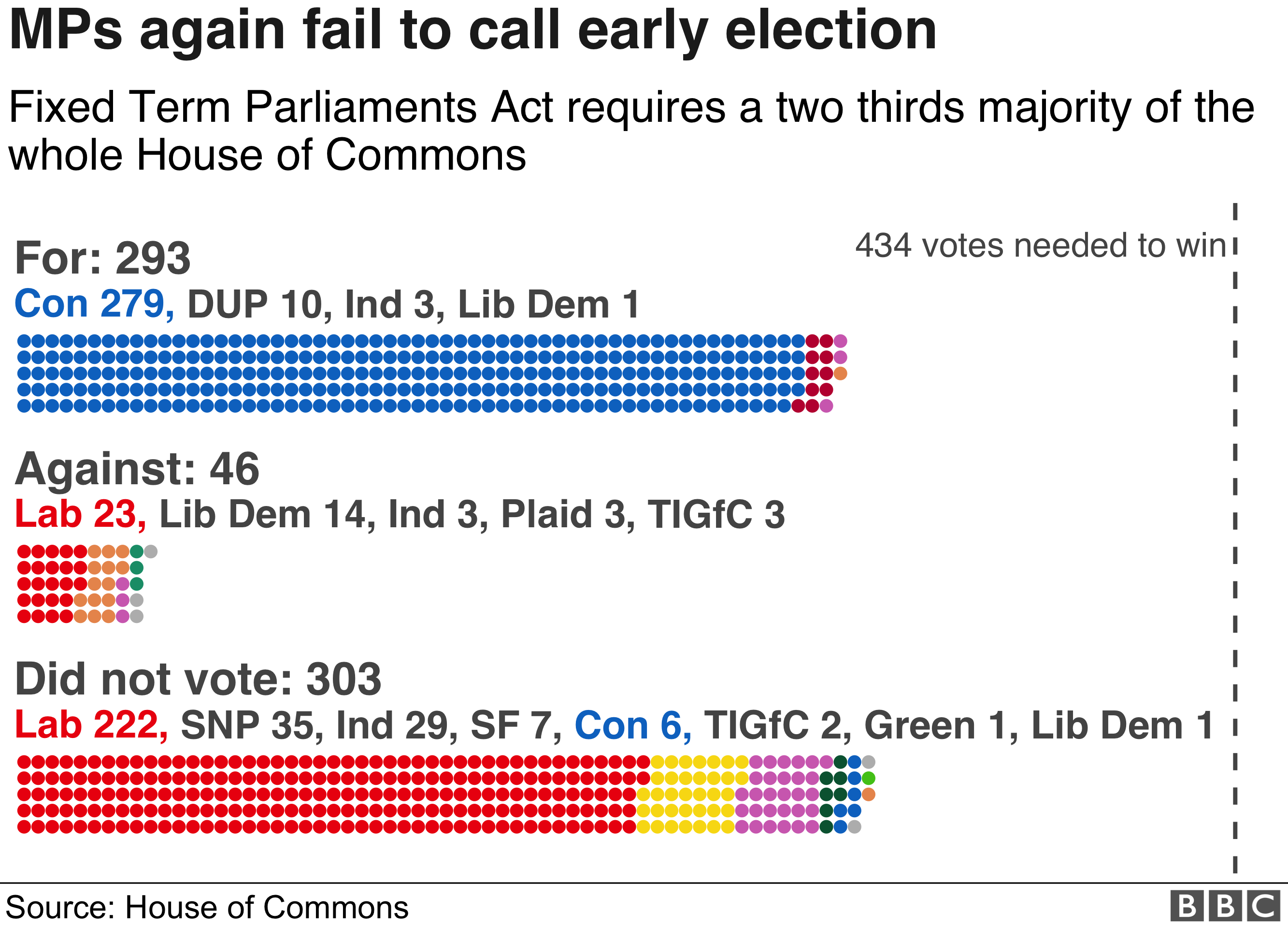 Sir Oliver Letwin, who last week defied Mr Johnson to vote to block a no-deal outcome and subsequently lost the Conservative whip – told BBC Radio 4’s Today he believed there was now a majority in the Commons to back another referendum.

Asked whether the prime minister would back a further vote, Mr Letwin replied: “Boris has often changed his mind about many things and that’s one of his advantages, that he’s very flexible so maybe he can.”

Former Conservative Dominic Grieve, who also lost the whip last week, was behind the move the force the publication of government communications relating to prorogation and no-deal Brexit plans, known as Operation Yellowhammer.

It was backed by 311 votes to 302, after Mr Grieve told MPs it was “entirely reasonable” to ask for the disclosure “so the House can understand the risks involved and this can be communicated more widely to the public”.

Cabinet minister Michael Gove, who is in charge of no-deal preparations, argued against the move, suggesting he had already given “sufficient assurances” to the EU select committee on Yellowhammer.

Attorney General Geoffrey Cox questioned the legal right of the government to require employees – including the PM’s top aide Dominic Cummings – to open up their private email accounts and personal mobiles to scrutiny.

After the vote, a government spokesman said it would “consider the implications and respond in due course”. 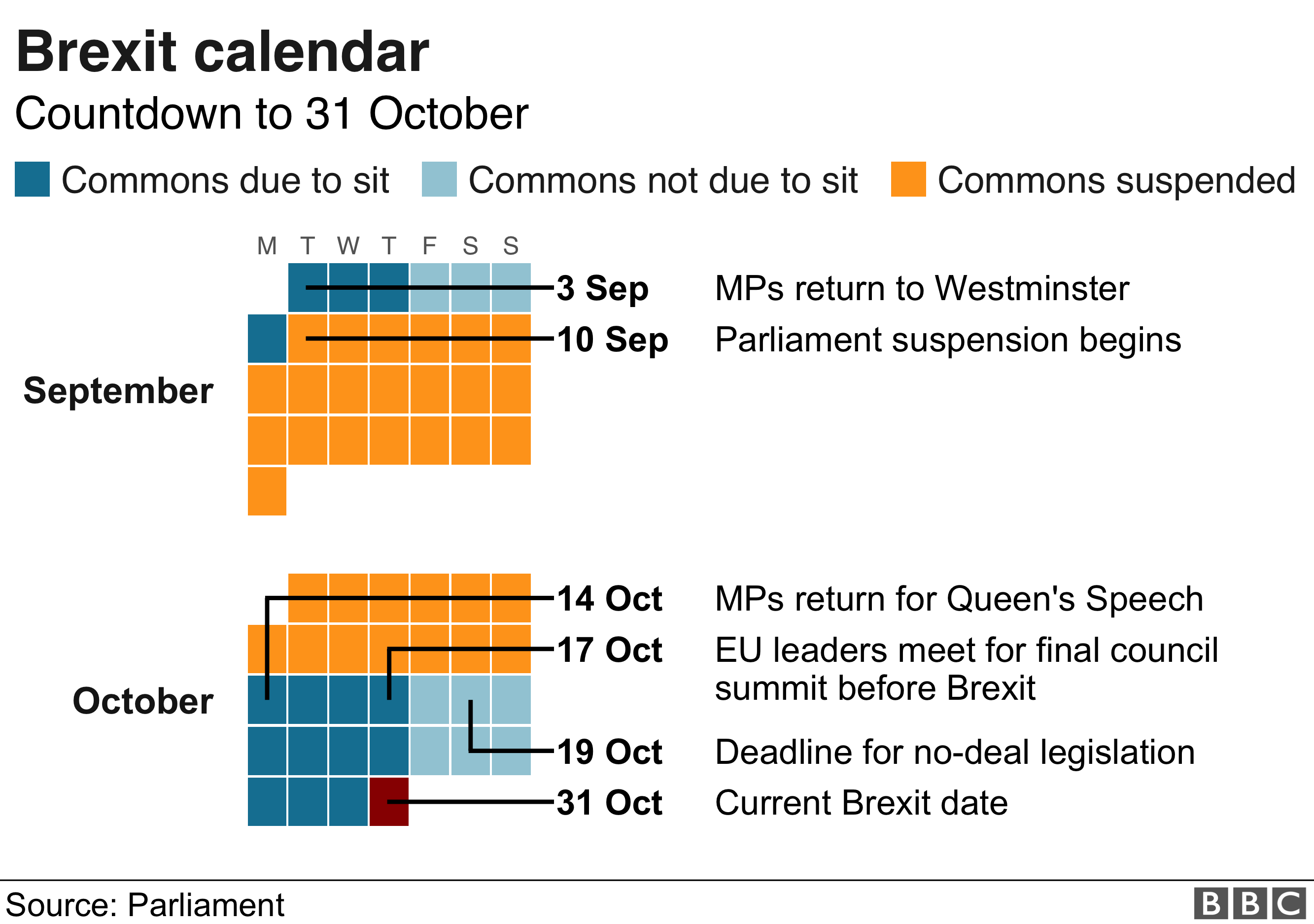 Earlier on Monday, Mr Johnson held talks with Leo Varadkar in Dublin, his first meeting with the Irish prime minister since he entered No 10.

The Irish border has proved a key sticking point in attempts to agree a Brexit deal between the UK and the EU.

Theresa May is expected to announce the date of her departure from Downing Street on Friday morning, senior cabinet ministers ……Read On.

Theresa May: My Pride and Disappointment

Theresa May has told the BBC she will feel a “mixture of pride and disappointment” when she leaves Downing Street ……Read On.

Boris Johnson has hit back at criticism that he threw the former British ambassador to the US “under a bus”. ……Read On.