The first of the government’s emergency field hospitals to treat coronavirus patients has opened in east London’s ExCel centre.

The temporary NHS Nightingale Hospital is able to hold as many as 4,000 patients and is the first of several such facilities planned across the UK.

The number of people who have died with coronavirus in the UK has increased by 684 in 24 hours, latest figures show.

It comes as the Queen will address the nation in a televised speech on Sunday.

The specially recorded speech about the coronavirus outbreak will be broadcast at 20:00 BST.

Meanwhile, Prime Minister Boris Johnson, who announced he had contracted the virus last Friday, says he will carry on self-isolating after continuing to display mild symptoms of the virus including a high temperature.

The ExCel exhibition space – usually used for large events such as Crufts and Comic Con – was transformed into a hospital in just nine days.

It is the first of several Nightingale Hospitals planned in England, with the latest announcement that two will be built at the University of the West of England in Bristol and the Harrogate Convention Centre.

Others are due to be set up at Manchester’s Central Complex as well as Birmingham’s National Exhibition Centre, which will open to patients on 12 April. 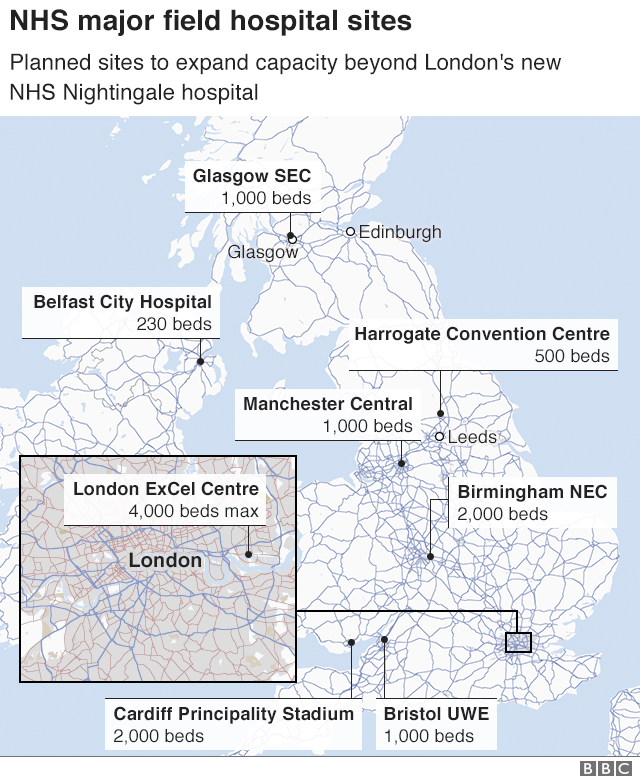 In Wales, more than 6,000 extra beds are being set up in temporary hospitals – many in sports and leisure facilities, including Cardiff’s Principality Stadium.

In Scotland, a temporary hospital is being built at Glasgow’s Scottish Events Campus (SEC). It could have capacity for as many as 1,000 beds and will be named the NHS Louisa Jordan after a nurse who served in Serbia during World War One.

Prince Charles officially opened the new hospital with a message paying tribute to NHS staff via video link from his home on the royal Balmoral estate in Scotland.

Speaking following seven days of self-isolation after being diagnosed with the virus, he called it “a spectacular and almost unbelievable feat of work”.

It shows “how the impossible could be made possible and how we can achieve the unthinkable through human will and ingenuity,” he added, saying: “In this dark time, this place will be a shining light.”

London’s Nightingale hospital initially has 500 beds in place, with space for another 3,500. It will care for patients with the virus in intensive care who have been transferred from other London hospitals.

Staff from across the NHS will be working there, including student nurses, medical students who have started work early and former doctors, nurses and other staff who have come out of retirement.

Also at the ceremony were Health Secretary Matt Hancock – who also recently came out of quarantine after having the virus – England’s chief nursing officer, Ruth May, and the head of NHS Nightingale, Prof Charles Knight.

Ms May said it was “absolutely fitting” that the hospital was named after Florence Nightingale, who was an “iconic nursing leader of her time” and a “pioneer for infection control”.

Mr Hancock said the construction of the hospital was “testament to the work and the brilliance of the many people involved”, and it showed the “best of the NHS”.

“In these troubled times with this invisible killer stalking the whole world, the fact that in this country we have the NHS is even more valuable than before,” he said. 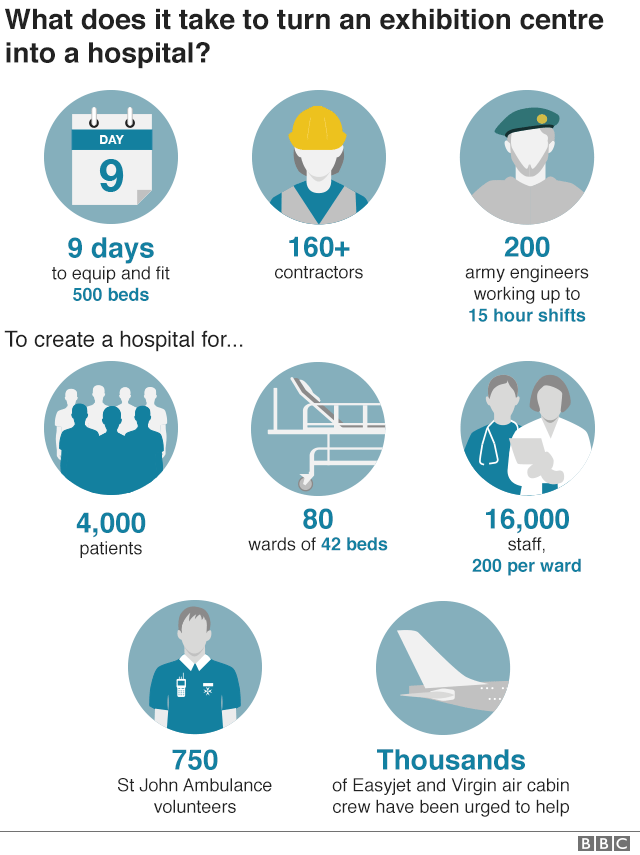 There were plenty of high-viz vests, but an equal amount of combats and the occasional suit and tie. Some carried computers, others electric drills.

They pushed trolleys of blankets, pallets of wood and wheeled hi-tech scanning equipment.

The range of staff working on the Nightingale is extraordinary. Military personnel stand in small groups discussing logistics, while carpenters speaking Portuguese build the new temporary pharmacy, senior medics design and standardise each cubicle with space for a ventilator and computer terminal, outlets for oxygen, and alarm-call button.

I’ve seen a brand new hospital – which may eventually become the biggest in the country – rise from from what are basically two aircraft hangers.

Imagine Terminal 5 at Heathrow airport full of beds and you are nearly there.

One man involved in the vital task of installing liquid oxygen tanks, with dark rings around his eyes, told me proudly they’d done a 12-week project in four days. It is an incredible achievement.

It was celebrated today by Prince Charles with a “lockdown” royal visit and a virtual ribbon cutting.

Earlier, amid controversy over the roll-out of testing for coronavirus in the UK, Mr Hancock said the government had “a huge amount of work to do” to meet its target of 100,000 tests a day by the end of April.

Mr Hancock said he was not relying on new antibody blood tests to meet the goal – and it was possible they could all be swab tests. Labour has called for more detail on the plan.

On Thursday, there was capacity for 12,799 daily tests in England – although just 11,764 people were tested. The government’s target by mid-April had been to test 25,000 per day.

Uber Launches Its Jump Bikes in London, Where Bike Sharing is Already Common

Uber launched its Jump electric bikes in London on Friday, marking a challenge to a number of bike-sharing services already available in the U.K.capital. ……Read On.

Brigham and Women’s Hospital denied a patient a heart transplant and is defending itself saying most transplant programs around the ……Read On.

In a matter of months, 100,000 lives have been lost to coronavirus in the United States – nearly triple that ……Read On.