The World Health Organization has declared the Ebola crisis in the Democratic Republic of Congo a “public health emergency of international concern”.

But the WHO stopped short of saying borders should be closed, saying the risk of the disease spreading outside the region was not high.

The outbreak in DR Congo has killed more than 1,600 people.

This week, the first case was detected in Goma, home to more than a million.

The PHEIC emergency provision is the highest level of alarm the WHO can sound and has only been used four times previously.

This includes the Ebola epidemic that devastated parts of West Africa from 2014 to 2016, and killed more than 11,000 people.

“It is time for the world to take notice,” WHO chief Tedros Adhanom Ghebreyesus told a news conference in Geneva on Wednesday at which the emergency was declared.

He said he accepted recommendations there should be no restrictions on travel or trade, and no entry screening of passengers at ports or airports outside the immediate region.

The International Federation of Red Cross and Red Crescent Societies welcomed the move.

“While it does not change the reality on the ground for victims or partners engaged in the response, we hope it will bring the international attention that this crisis deserves,” it said in a statement.

How bad is the situation in DR Congo?

The outbreak, the second largest in history, started in August 2018 and is affecting two provinces in DR Congo – North Kivu and Ituri.

More than 2,500 people have been infected and two-thirds of them have died.

About 12 new cases are being reported every day. 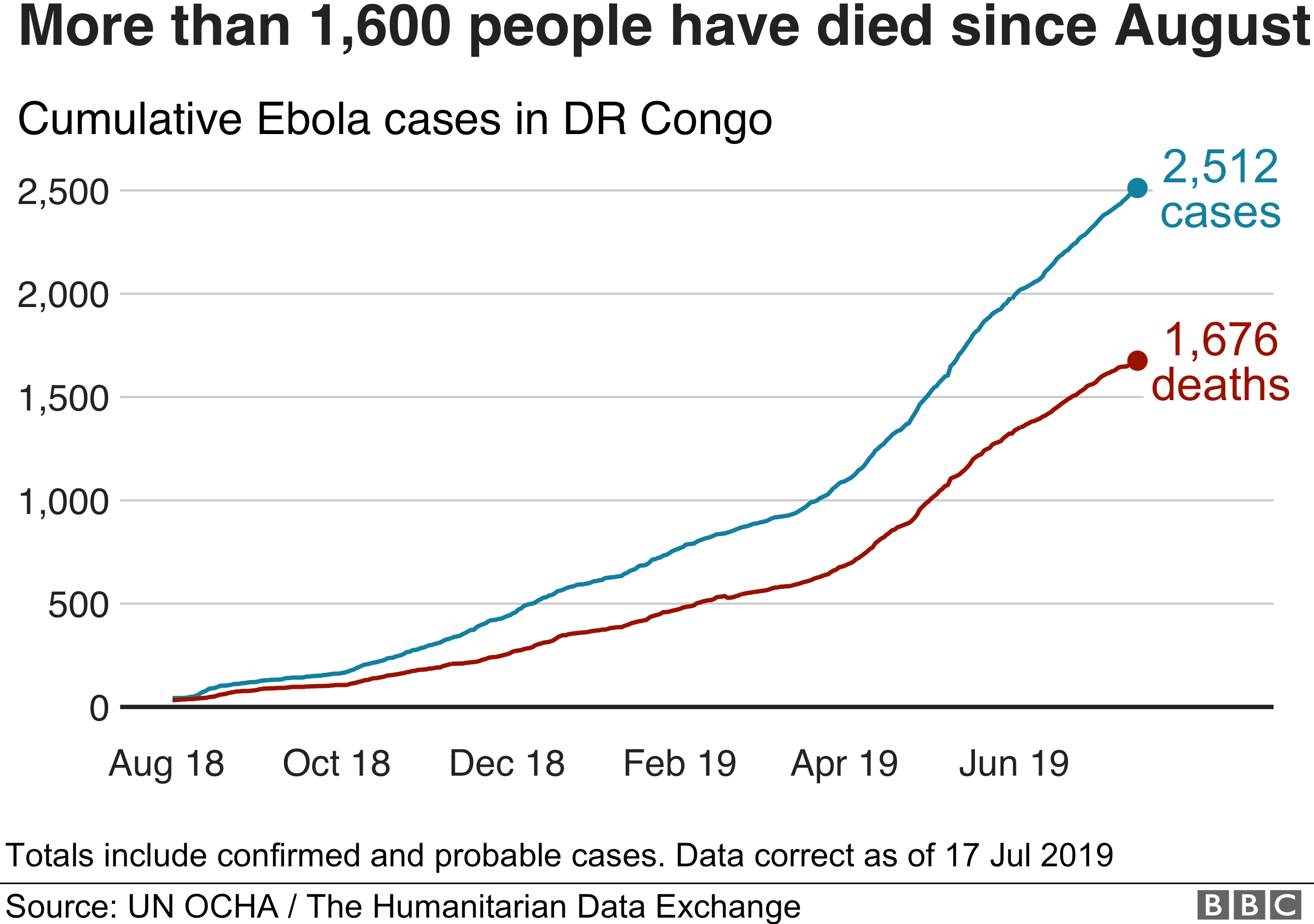 Isn’t there a vaccine?

The vaccine was developed during the epidemic in West Africa and has been available throughout the latest outbreak.

Why hasn’t the outbreak been brought under control?

Tackling the disease has been complicated by conflict in the region.

Since January, there have been 198 attacks against healthcare workers or Ebola treatment facilities leading to seven deaths and 58 injuries.

Another major problem has been distrust of healthcare workers leading to about a third of deaths being in the community rather than at a specialist Ebola treatment centre.

It means those people are not seeking treatment and risk spreading the disease to neighbours and relatives.

There has also been difficulty tracking the spread of the virus.

A significant number of cases are coming as a surprise as those affected have not come into contact with known Ebola cases.

“We are one year into the outbreak and the situation is not getting any better,” said Trish Newport, from the charity MSF.

“It’s a complex environment with a long history of violence, of conflict, so there’s a lot of mistrust of foreigners from outside the area.

“We have to build ties and connections with the community so they trust us.”

Could the disease spread further?

The WHO says the risk to neighbouring countries is “very high”.

Uganda has already had some isolated cases including two people – a five-year-old boy and his 50-year-old grandmother – who died from the disease. Rwanda is also at risk.

This week a priest died from Ebola in the city of Goma, which is home to more than a million people. The city is a major transport hub and sits on the DR Congo-Rwanda border.

The WHO said cases there were a “game-changer”, however, there have been no reported cases of the disease spreading in Goma.

Is the world doing enough to help?

The WHO has been clear for months that it has insufficient money to tackle the problem.

It had estimated that it needed $98m to tackle the outbreak between February and July. Yet it faced a shortfall of $54m.

The experts know what is happening in the eastern Democratic Republic of Congo as do the majority of those who ……Read On.

Ebola may soon be a “preventable and treatable” disease after a trial of two drugs showed significantly improved survival rates, ……Read On.