It is painful to watch the prime minister “pleading” with EU leaders to grant another extension to the Brexit date, Arlene Foster has said.

The DUP leader told the BBC she found it “humiliating that we are having to go and beg so that we can leave”.

The UK is still scheduled to leave the EU on 12 April, unless a delay is agreed.

Mrs. May is meeting German and French leaders on Tuesday afternoon, in a bid to seek support to postpone the Brexit date again.

The prime minister met Angela Merkel in Berlin, and will meet Emmanuel Macron in Paris, as she urges both to back her request to delay Brexit again until 30 June.

After the talks, Ms Merkel said a delay that runs to the end of the year or the start of 2020 was a possibility.

But Mrs Foster criticised the Prime Minister saying she “needed to be strong, she needed to show leadership, and I’m sorry to say that hasn’t been evident in this past couple of months”. 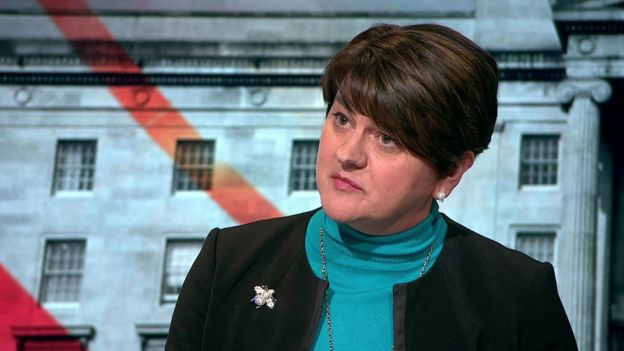 However, when pressed on the future of the confidence-and-supply pact her party shares with the government, Mrs. Foster said who leads the Conservatives is not a matter for the DUP.

She insisted that the DUP would work in the interests of unionism and would work with whoever was prime minister, but she said it was disappointing that the Irish border backstop still had not been dealt with.

“She is the leader of a party that said they would deliver on Brexit and at the moment she is failing to do that,” she added.

Meanwhile, the Taoiseach (Irish prime minister) Leo Varadkar has said he is “confident” an extension will be agreed at the EU summit.

Leo Varadkar said the discussions would focus on the length of any extension and the conditions applied to it, such as shaping a new Common Agricultural Policy (CAP) and electing the next president of the European Commission – and whether the UK could be involved in these decisions.

He said many EU countries were concerned that Brexit was “taking up so much of the EU agenda”.

Mr. Varadkar added that the Irish government had no objection to a long extension, but he did not want to see that leading to the re-opening of the Withdrawal Agreement.

He said there were certain dates in the text that would expire if the extension was too lengthy, that could lead to the agreement having to be amended.

Theresa May: My Pride and Disappointment

Theresa May has told the BBC she will feel a “mixture of pride and disappointment” when she leaves Downing Street ……Read On.

The threat to the supply of vital medicines still remains in the event of a no-deal Brexit, according to the ……Read On.

The Constitutional Crisis Facing the Next PM

It’s hard to think of political circumstances less conducive to calm reflection and sober judgement than this Tory party leadership ……Read On.