It’s the most powerful greenhouse gas known to humanity, and emissions have risen rapidly in recent years, the BBC has learned.

Sulphur hexafluoride, or SF6, is widely used in the electrical industry to prevent short circuits and accidents.

But leaks of the little-known gas in the UK and the rest of the EU in 2017 were the equivalent of putting an extra 1.3 million cars on the road.

Levels are rising as an unintended consequence of the green energy boom.

Cheap and non-flammable, SF6 is a colourless, odourless, synthetic gas. It makes a hugely effective insulating material for medium and high-voltage electrical installations.

It is widely used across the industry, from large power stations to wind turbines to electrical sub-stations in towns and cities. It prevents electrical accidents and fires.

However, the significant downside to using the gas is that it has the highest global warming potential of any known substance. It is 23,500 times more warming than carbon dioxide (CO2).

Just one kilogram of SF6 warms the Earth to the same extent as 24 people flying London to New York return.

It also persists in the atmosphere for a long time, warming the Earth for at least 1,000 years.

So why are we using more of this powerful warming gas?

The way we make electricity around the world is changing rapidly.

Where once large coal-fired power stations brought energy to millions, the drive to combat climate change means they are now being replaced by mixed sources of power including wind, solar and gas.

This has resulted in many more connections to the electricity grid, and a rise in the number of electrical switches and circuit breakers that are needed to prevent serious accidents.

Collectively, these safety devices are called switchgear. The vast majority use SF6 gas to quench arcs and stop short circuits.

“As renewable projects are getting bigger and bigger, we have had to use it within wind turbines specifically,” said Costa Pirgousis, an engineer with Scottish Power Renewables on its new East Anglia wind farm, which doesn’t use SF6 in turbines.

“As we are putting in more and more turbines, we need more and more switchgear and, as a result, more SF6 is being introduced into big turbines off shore.

“It’s been proven for years and we know how it works, and as a result it is very reliable and very low maintenance for us offshore.”

How do we know that SF6 is increasing?

Across the entire UK network of power lines and substations, there are around one million kilograms of SF6 installed.

A study from the University of Cardiff found that across all transmission and distribution networks, the amount used was increasing by 30-40 tonnes per year.

This rise was also reflected across Europe with total emissions from the 28 member states in 2017 equivalent to 6.73 million tonnes of CO2. That’s the same as the emissions from 1.3 million extra cars on the road for a year. 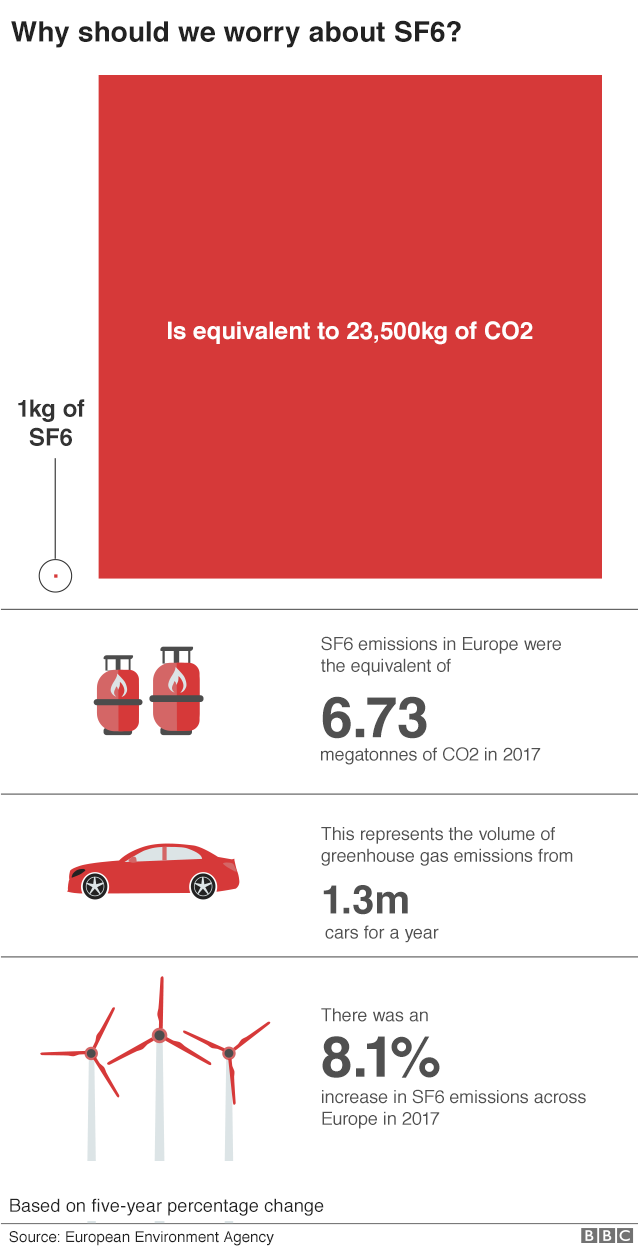 Researchers at the University of Bristol who monitor concentrations of warming gases in the atmosphere say they have seen significant rises in the last 20 years.

“We make measurements of SF6 in the background atmosphere,” said Dr Matt Rigby, reader in atmospheric chemistry at Bristol.

“What we’ve seen is that the levels have increased substantially, and we’ve seen almost a doubling of the atmospheric concentration in the last two decades.”

How does SF6 get into the atmosphere?

The most important means by which SF6 gets into the atmosphere is from leaks in the electricity industry.

Electrical company Eaton, which manufactures switchgear without SF6, says its research indicates that for the full life-cycle of the product, leaks could be as high as 15% – much higher than many other estimates.

Louis Shaffer, electrical business manager at Eaton, said: “The newer gear has very low leak rates but the key question is do you have newer gear?

“We looked at all equipment and looked at the average of all those leak rates, and we didn’t see people taking into account the filling of the gas. Plus, we looked at how you recycle it and return it and also included the catastrophic leaks.”

How damaging to the climate is this gas?

Concentrations in the atmosphere are very small right now, just a fraction of the amount of CO2 in the air.

Another concern is that SF6 is a synthetic gas and isn’t absorbed or destroyed naturally. It will all have to be replaced and destroyed to limit the impact on the climate. 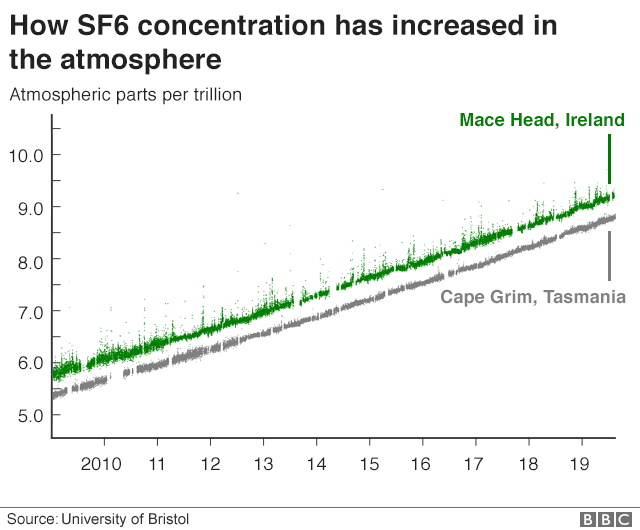 Developed countries are expected to report every year to the UN on how much SF6 they use, but developing countries do not face any restrictions on use.

Right now, scientists are detecting concentrations in the atmosphere that are 10 times the amount declared by countries in their reports. Scientists say this is not all coming from countries like India, China and South Korea.

One study found that the methods used to calculate emissions in richer countries “severely under-reported” emissions over the past two decades.

Why hasn’t this been banned?

SF6 comes under a group of human-produced substances known as F-gases. The European Commission tried to prohibit a number of these environmentally harmful substances, including gases in refrigeration and air conditioning, back in 2014.

But they faced strong opposition from industries across Europe.

“In the end, the electrical industry lobby was too strong and we had to give in to them,” said Dutch Green MEP Bas Eickhout, who was responsible for the attempt to regulate F-gases.

“The electric sector was very strong in arguing that if you want an energy transition, and you have to shift more to electricity, you will need more electric devices. And then you also will need more SF6.

“They used the argument that otherwise the energy transition would be slowed down.”

What do regulator and electrical companies say about the gas?

Everyone is trying to reduce their dependence on the gas, as it is universally recognised as harmful to the climate.

In the UK, energy regulator Ofgem says it is working with utilities to try to limit leaks of the gas.

“We are using a range of tools to make sure that companies limit their use of SF6, a potent greenhouse gas, where this is in the interest of energy consumers,” an Ofgem spokesperson told BBC News.

Are there alternatives – and are they very expensive?

The question of alternatives to SF6 has been contentious over recent years.

For high-voltage applications, experts say there are very few solutions that have been rigorously tested.

“There is no real alternative that is proven,” said Prof Manu Haddad from the school of engineering at Cardiff University.

“There are some that are being proposed now but to prove their operation over a long period of time is a risk that many companies don’t want to take.”

However, for medium voltage operations there are several tried-and-tested materials. Some in the industry say that the conservative nature of the electrical industry is the key reason that few want to change to a less harmful alternative.

“I will tell you, everyone in this industry knows you can do this; there is not a technical reason not to do it,” said Louis Shaffer from Eaton.

“It’s not really economic; it’s more a question that change takes effort and if you don’t have to, you won’t do it.”

Some companies are feeling the winds of change

Sitting in the North Sea some 43km from the Suffolk coast, Scottish Power Renewables has installed one of world’s biggest wind farms where the turbines will be free of SF6 gas.

East Anglia One will see 102 of these towering generators erected, with the capacity to produce up to 714MW (megawatts) of power by 2020, enough to supply half a million homes.

Previously, an installation like this would have used switchgear supplied with SF6, to prevent the electrical accidents that can lead to fires.

Each turbine would normally have contained around 5kg of SF6, which, if it leaked into the atmosphere, would add the equivalent of around 117 tonnes of carbon dioxide. This is roughly the same as the annual emissions from 25 cars.

“In this case we are using a combination of clean air and vacuum technology within the turbine. It allows us to still have a very efficient, reliable, high-voltage network but to also be environmentally friendly,” said Costa Pirgousis from Scottish Power Renewables.

But even for companies that are trying to limit the use of SF6, there are still limitations. At the heart of East Anglia One sits a giant offshore substation to which all 102 turbines will connect. It still uses significant quantities of the highly warming gas.

The EU will review the use of SF6 next year and will examine whether alternatives are available. However, even the most optimistic experts don’t think that any ban is likely to be put in place before 2025.

Biology and Physics Might Combine to Increase Greenhouse Effect

The world’s oceans soak up about a quarter of the carbon dioxide that humans pump into the air each year ……Read On.

Hundreds of thousands of people across the world are taking to the streets to call for urgent measures to tackle ……Read On.

US objections to wording on climate change prevented Arctic nations signing a joint statement at a summit in Finland, delegates ……Read On.