Cancer care in England has faced major disruption during the pandemic with big drops in numbers being seen following urgent referrals by GPs, figures show.

The number of people being assessed by a cancer doctor after referral fell to 79,500 in April – a drop of 60% compared to the same month last year.

The NHS said it had tried to protect services. 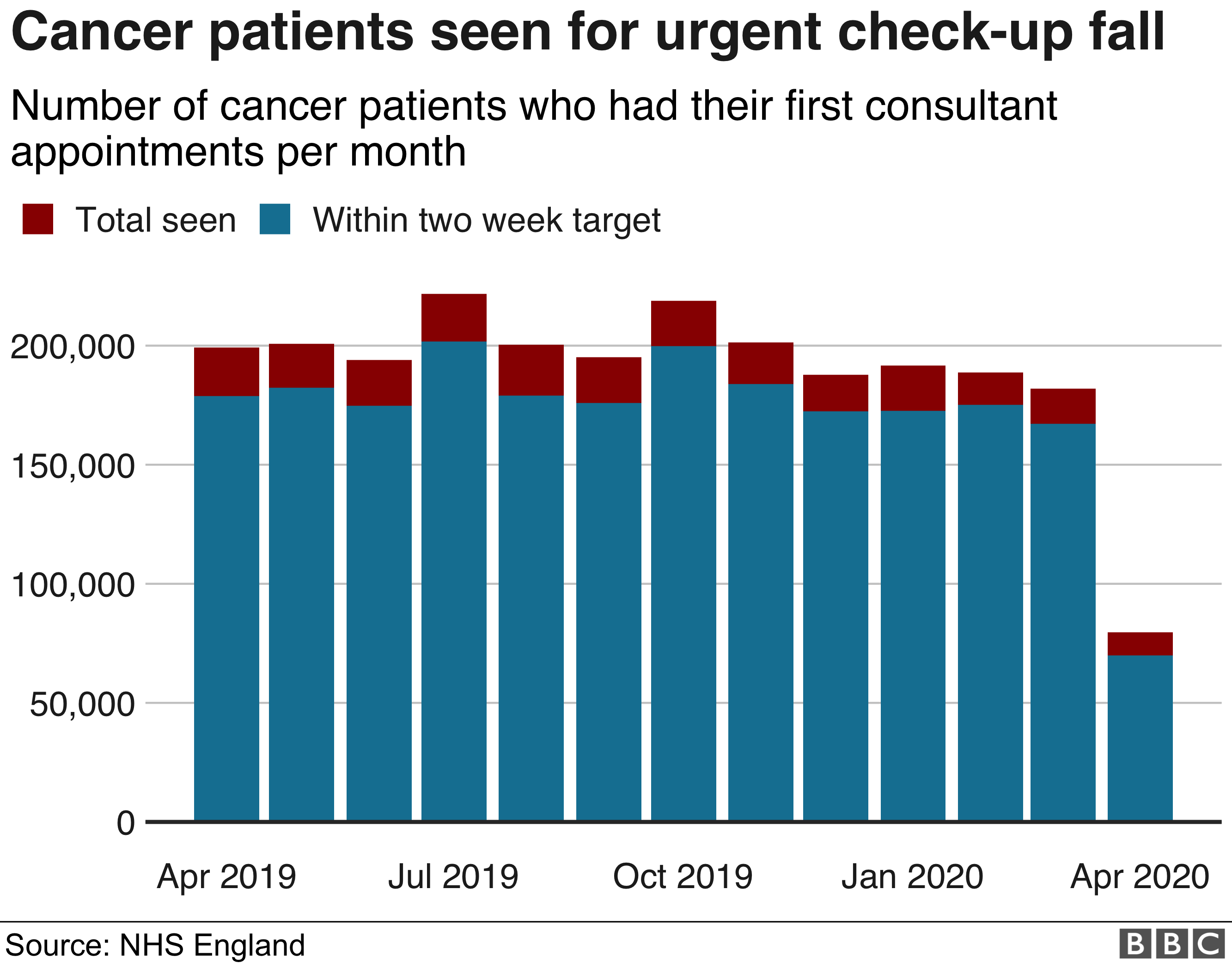 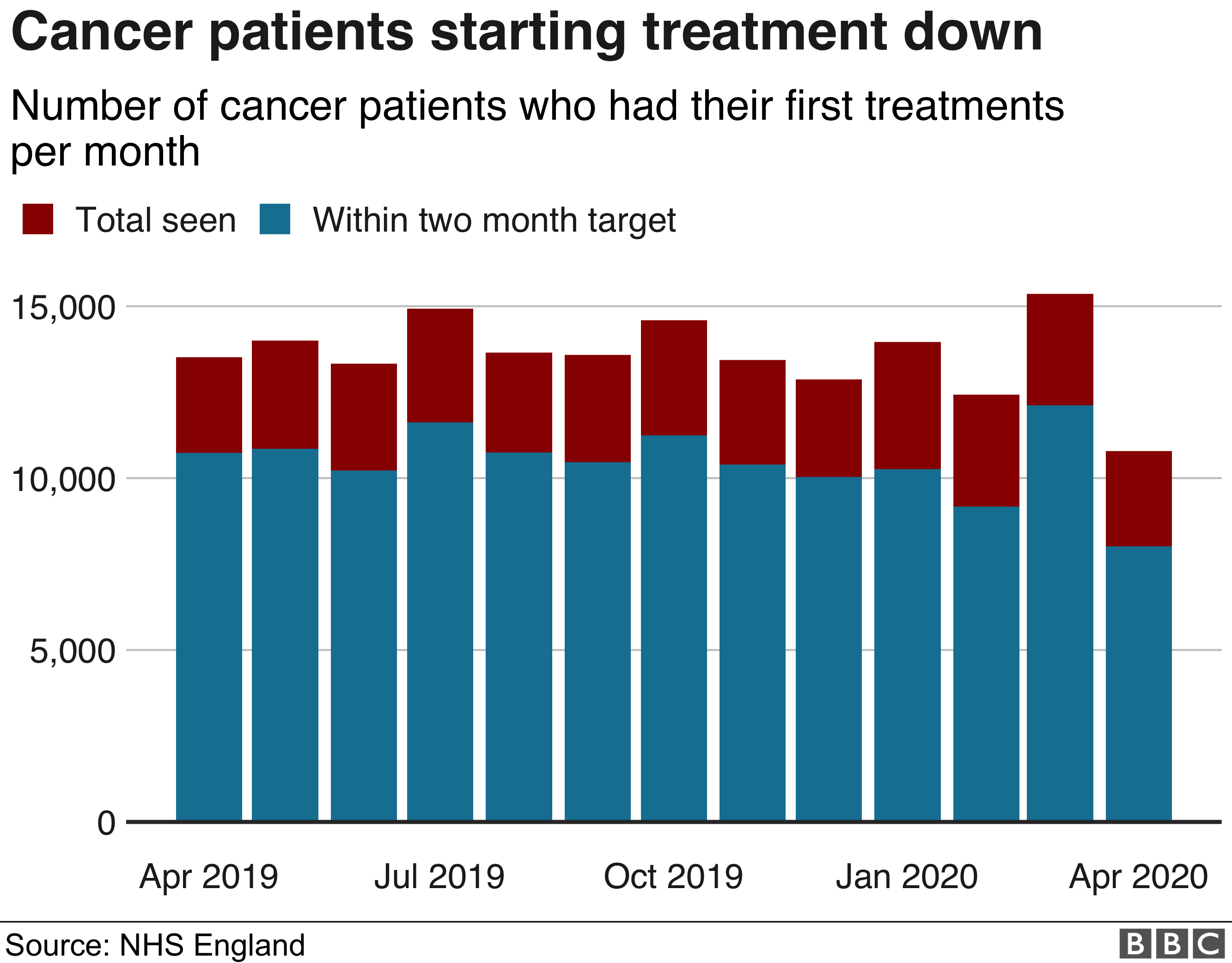 NHS England said a number of innovative approaches were being introduced to keep cancer care running.

This has included delivering more chemotherapy in the community and people’s homes as well as creating “Covid-free” wings in hospital to protect patients.

And he urged people to come forward for treatment amid concerns fear of the virus is deterring people from seeking help.

But charities warned the disruption to services would have a devastating effect.

As well as the drop in referrals and treatment starting, Cancer Research UK estimates that there will be a backlog of more than two million people waiting for screening across the UK.

Thousands of patients have also seen their on-going treatment stopped.

Baroness Delyth Morgan, of Breast Cancer Now, said her charity has been deluged with calls from people worried about not getting treatment.

“It is extremely concerning,” she said.

Sara Bainbridge, head of policy at Macmillan Cancer Support, said cancer was at risk of becoming the “forgotten C in this pandemic.”

‘My cancer treatment has been stopped’

She has been given a drug called palbociclib ever since to slow down the cancer, but her treatment had to be stopped in April because it left her susceptible to coronavirus.

“I wasn’t happy. It has kept my cancer stable for three years. I try not to think what will happen.

“There are a lot of people like me who’ve had to pause their cancer treatment and not all of us will have good results at the end of this.

“I’m just hoping that the risk of coronavirus drops low enough soon so I can restart my treatment.”

How services have been adapted

In England – and elsewhere in the UK for that matter – NHS bosses have sought new ways to deliver cancer care.

“Covid-free” wings have been set up in hospitals to allow cancer patients to be treated.

These have been organised by 21 cancer hubs in England with lead cancer hospitals helping to coordinate care.

In London, for example, this has been led by the Royal Marsden which has been seeing patients from across the capital.

There has also been a focus on delivering care in the community and people’s homes – with “chemo-buses” used in some places to allow staff to tour neighbourhoods providing chemotherapy from the back of an adapted van.

The roll-out of a targeted form of radiotherapy has been rolled out, which requires fewer courses of treatment meaning patients do not have to visit hospital so often.

The figures published also include data for A&E and routine operations.

Routine operations were cancelled en-masse during April to help free up space for the expected surge of coronavirus patients.

Routine work is now in the process of being re-started, although NHS bosses have said the waiting list could more than double in size by the start of next year as hospitals are struggling to get back to full capacity because of the strain of dealing with the pandemic.

The A&E data is more recent – it covers the month of May.

But it the numbers did represent an increase from just over 900,000 in April.

Coronavirus: Thousands of Abandoned Pets 'at Risk of Starving to Death'

Thousands of pets trapped in the epicentre of China’s deadly coronavirus outbreak are at risk of starving to death, according ……Read On.

Who is Creating Thousands of Jobs to Meet Coronavirus Demand?

Three major supermarkets have become the latest to launch a recruitment drive with a total of 16,500 jobs on offer ……Read On.

EMS workers wheel a patient out of NYU Langone Health hospital during the coronavirus pandemic on April 13, 2020 in ……Read On.