Amazon this morning announced another step it’s taken to speed up same-day deliveries. The company has installed what it’s calling “mini-fulfillment centers” closer to where customers live in select U.S. markets, including Philadelphia, Phoenix, Orlando, and Dallas. The new facilities allow Amazon to reduce same-day delivery times down to just a few hours for Prime members in those areas.

Shoppers will be able to order from up to 3 million items across dozens of categories, where they’re marked as “Today by.” This is slightly different from how other same-day services operate, as they require you to fill a cart and pick a time slot for delivery. Prime members will instead be able to view how quickly a given item can arrive on their doorstep as they’re browsing Amazon.com.

This also allows customers to shop throughout the day, rather than having to hop online in the morning to reserve an afternoon or evening time slot, for example. In addition, Amazon says Prime members can order as late as midnight to receive packages on their doorstep by the next morning by choosing the “overnight by 8 AM” delivery option. In these cases, drivers will arrive between 4:30 AM and 8 AM — meaning packages will arrive before customers have to leave for work, in some cases. 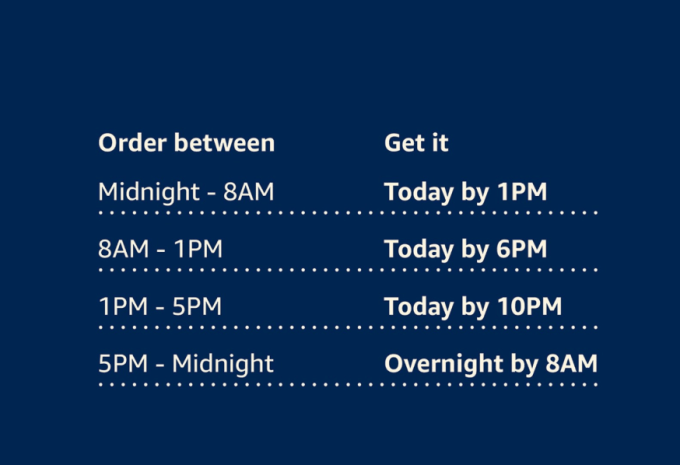 Amazon touts, too, that having facilities closer to customers will help it to reduce its carbon footprint as drivers won’t have to travel as far in order to make their deliveries. The company claims it will help reduce aircraft transport as well, and provide more delivery jobs — including via its crowd-sourced Amazon Flex program.

The move is meant to help Amazon better compete against rivals like Walmart and Target, both of which leverage their local stores to make online ordering, followed by either curbside pickup or delivery, more convenient for customers. Walmart, for example, has a store within 10 miles of 90% of the U.S. population. That’s been one of its competitive advantages against Amazon, which has many of its fulfillment centers located outside the cities they serve. This has been particularly helpful when it comes to competing in online grocery, which later forced Amazon to snap up Whole Foods in order to have square footage closer to its customers.

Amazon said last year it was working to reduce the delay on Prime shipping, promising it would bring Prime from 2-day delivery down to just one. By placing mini-fulfillment centers in local markets, it’s taking steps to being able to serve Prime members even more quickly.

Today, Amazon offers same-day delivery to Prime members on orders over $35 or with a $2.99 delivery fee for orders under $35. Amazon’s existing same-day service, Prime Now only offers 20,000 items for same-day delivery, by comparison, making this a significant expansion of Amazon’s same-day capabilities. An annual subscription to Prime offers 2-day delivery of over 100 million items for $119 per year. Last month, Amazon said it had grown its subscriber base to over 150 million members.

Iran has fired 22 ballistic missiles at two Iraqi bases housing US and coalition troops. The Islamic Revolutionary Guard has ……Read On.

People wonder if we’re still living in the era of Peak TV. For a few years, it seemed no one ……Read On.